The many names of the dandelion (Taraxacum officinale). 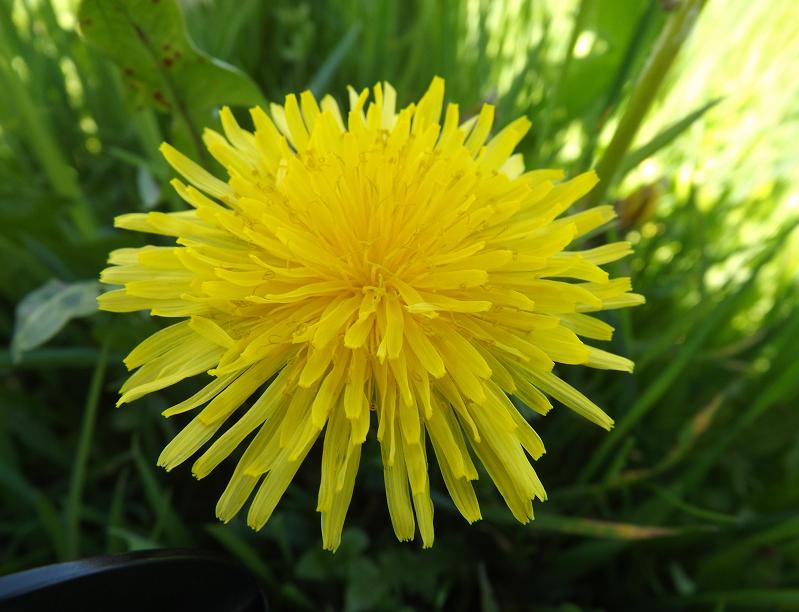 Why the dandelion is not named a Leontodon (Hawkbit).

INTRODUCTION.
Who doesn´t know the dandelion, this common yet so beautiful flower? The dandelion does not exist of a single species, but of an agglomeration of many micro species, which is partly the result of its possibility of multiplication by means of unfertilized seeds (cloning). The plant forms a rosette with strongly toothed leaves and the stems are hollow with on top a flower head consisting of many yellow ray florets. The dandelion is listed among the composites or Asteraceae. The plant has a surprising number of applications, but to avoid too long  a post only its naming is discussed here. Already many years ago I noticed that the meaning of dandelion in English and Spanish is "lion´s tooth", although in the Netherlands the name lion´s tooth is reserved for the genus Leontodon (hawkbits), while the dandelion is called "horse-flower". However, to make the confusion complete some Spaniards call the dandelion "meacama (= piss-a-bed) and the hawkbits (Leontodon)  they call "diente de león". So this asked for a little research. 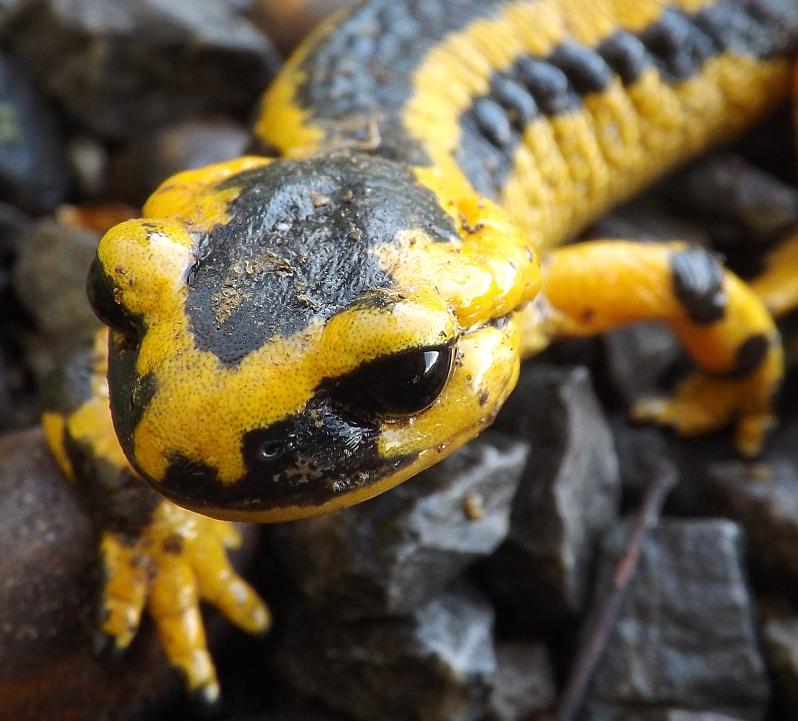 A fire salamander rescued from a dangerous crossing.

At our last visit to my brother who lives in Asturias, he had a pleasant surprise in store for me. On his shady and cool back patio there was a large covered plastic vegetable crate, filled with 4 inches of damp earth and leaves. After removing the cover I could see an old tile and under the tile ....


A day earlier on the way home from a pleasant bike ride my brother suddenly saw a fire salamander who just started an attempt to cross a road with lots of traffic (or as my brother put it: a salamander that had just started a highly efficient suicide attempt). Normally he takes life weary amphibians with him to release them in a safer environment away from roads and other calamities. But my brother remembered that I always have been a lover of amphibians and that´s why he decided this time to wait a day before releasing it again.

........So under the tile there was a beautiful fire salamander. According to my brother, it was a lot thicker than when he found it and this was very likely due to the diet of earthworms and slugs which he had served it the night before.
Using the opportunity some quick snapshots were taken and soon the salamander was back inside its temporary shelter. The same evening it was released in a humid slope forest more than a kilometer away from the nearest road.
Incidentally my brother found a week later and almost at the same place another fire salamander which not had managed to cross the road.
This salamander belongs to the subspecies Salamandra salamandra bernardezi, endemic to the northwest of Spain, and thus also to the Cantabrian Mountains.
Deze post in het Nederlands: klik hier

Flowers in March in the Cantabrian Mountains, Part 1 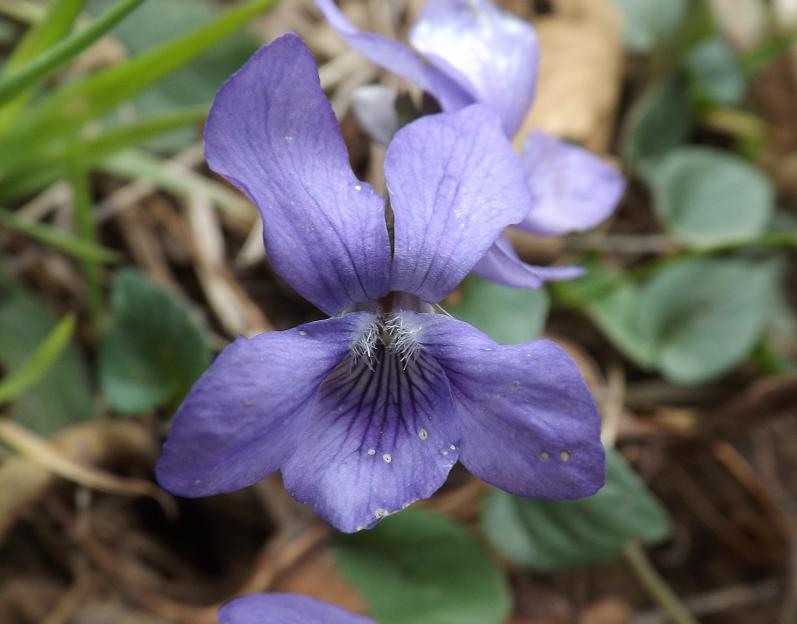 The end of winter in Asturias: flowers already blooming in the Cantabrian Mountains.

In march we managed to escape a few days to Asturias to enjoy its softer sea-climate, where we found many blooming plants. We were able to photograph at least 40 different species of which some are really common and others quiet rare. A small collection of flowers we found is shown in this post, while the others will be adressed in following posts.


READ MORE AND ENJOY THE PHOTOS. 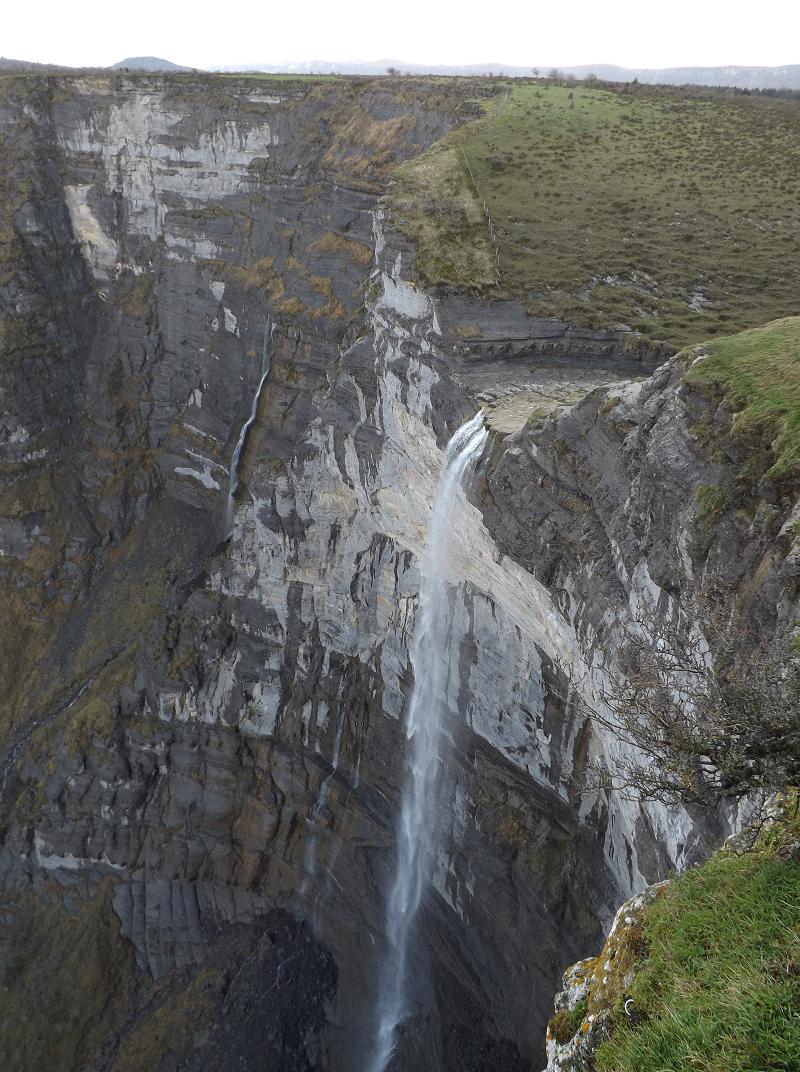 Monte Santiago, the abrupt boundary between the Spanish plateau and the Basque lowlands.

During the Easter holiday we managed to escape for a few days, devoting our time to the detection of new orchid sites, exploring caves and visiting beautiful places. In this post I want to share some pictures of the Monte Santiago Natural Park, with its 300 meters high waterfall: “El salto del Río Nervión”. This blog is also dedicated to natural spaces located in the immediate vicinity of the Cantabrian Mountains.

The location of this park is quiet special, because it´s the only place where the Spanish highland (meseta) borders the coastal lowlands. Most of the northern meseta (with heights of 800 to 900 meters) is separated from the north coast by the Cantabrian Mountains (with altitudes of over 2000 meters). However, these mountains end some 30 kilometers west of Monte Santiago, so that in this park the meseta is directly adjacent to the lowland of Vizcaya (Basque Country). The border between both regions consists of a dizzying steep cliff of about 500 to 600 meters high and several tens of kilometers long: a spectacular sight enhanced in value by the presence of numerous vulture nests. The River Nervión collects its water on the meseta and streams towards the cliff where it flows over the edge and plunges down. However, this 300 meter high waterfall can only be admired during periods of heavy rain or melting snow. This is due to the karst nature of the plateau, where most of the surface water quickly disappears below ground into an enormous underlying cavesystem. Monte Santiago is covered with a beech forest which is fed by rain and mist coming from the sea. Also there are the ruins of the medieval monastery of Santiago de Langrériz, which gives its name to this natural park.

READ MORE AND ENJOY THE PHOTOS.