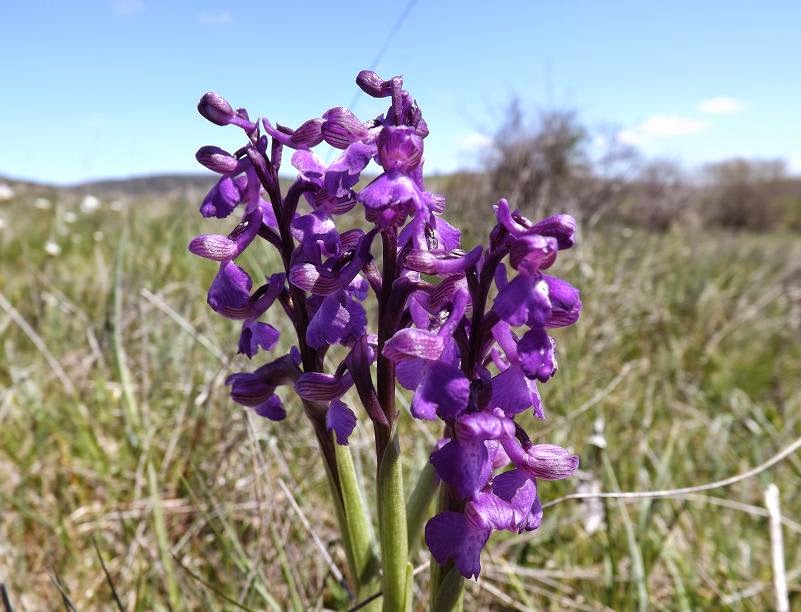 A huge field filled with tens of thousands of wild orchids of the species Anacamptis picta.

About 10 days ago by chance we encountered a huge field full of wild orchids. They were all of a species which is fairly common in the southern Cantabrian Mountains: the Anacamptis picta. As often, not everybody agrees with this name and this orchid is also known as the Anacamptis morio subsp. picta, and formerly it was known as the Orchis morio subsp. picta. Whatever its name, suddenly we saw a field which was really packed with orchids. Fortunately, the field was not grazed by cattle, although grazing at the right time of the year is rather  positive for orchids. The numbers of A. picta were truly overwhelming, so much that there was a purple glow over the field. The surface of the field is about 10 hectares (measured from air photos) and a very conservative estimate is that there are significantly more than five hundred thousand (500,000) orchids. Of course something special like this has to be shared, although the exact location can´t be mentioned 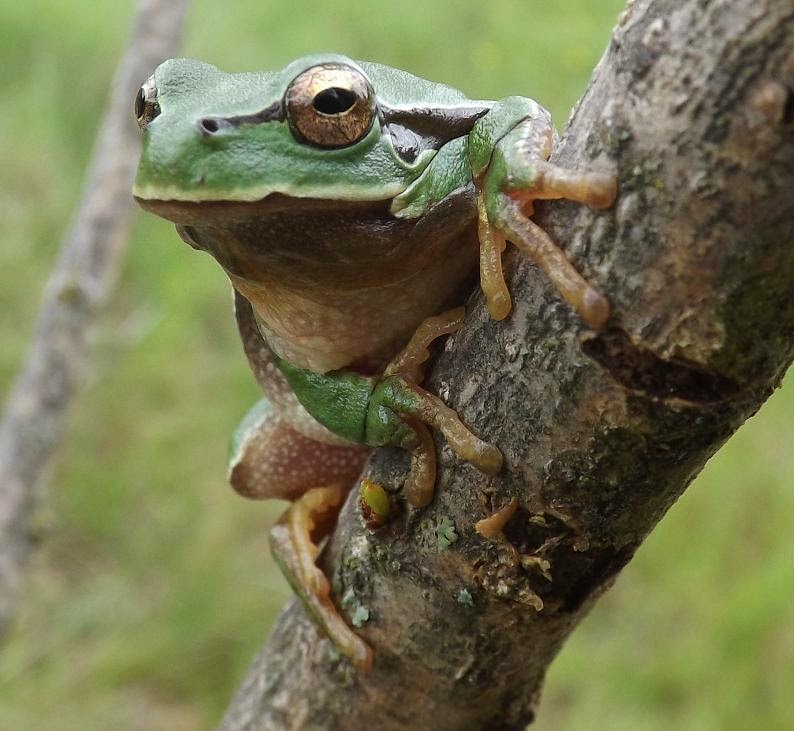 On one of our botanical searches we came to a small pool of water, which as usual was inmediately investigated for the presence of amphibians and what a surprise: along the side and hidden among the reeds there was a tree frog. By approximation it disappeared under water, but apparently the animal wasn´t to comfortable under water because every minute or so it came back to the surface. After a few pictures we decided to try to catch it for a detailed inspection, which with a lifetime developed catching technique wasn´t too difficult. After close inspection the animal was put on a branch for a picture and as usual it barely wanted to leave my warm hand. The animal was cooperating very well and after some shots it was put back again at the place where it was caught.

Information about the tree frog.

In the northwestern half of the Iberian Peninsula the tree frog Hyla arborea is replaced by the subspecies Hyla arborea subsp. molleri, although many scientists consider it as a separate species: the Hyla molleri. Anyway, the tree frog is a small green frog that usually dwells between the foliage on damp places near water. This frog is a good climber which is due to the adhesive disks on fingers and toes. It has a smooth green skin with on both sides a black stripe along the body, which seperates the dorsal skin from the ventral skin. This black stripe is bordered by a white line. The ventral skin has an ocher-yellowish color, which of course we usually can´t see. The pupils are horizontal and the iris has a color similar to the belly of the frog, but slightly yellower with a golden appearance. Normally this species is active at night so it was a real opportunity to find it. In Spain, the species is booked as "near threatened" and the populations are declining for several reasons, of which the most important are: the increasing general desiccation of Spain, decrease of the right habitats, and contamination of water by agricultural fertilizers which is very damaging to the larvae.
The favorite food consists of insects, especially ants, but however the frog itself is also on the menu of vipers, owls and kestrels, among others. 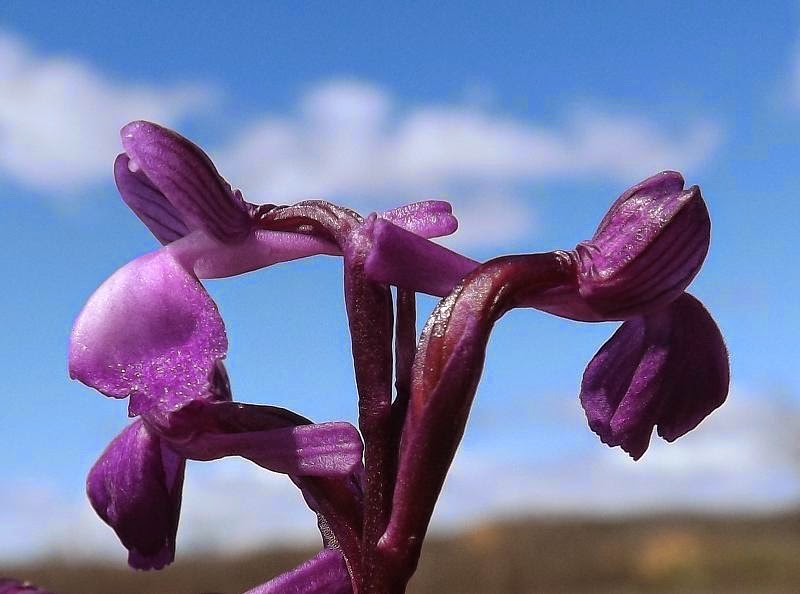 Just another orchid from the Cantabrian Mountains: the Anacamptis champagneuxii, member of the section Moriones.

The Anacamptis champagneuxii is a rare and purple colored orchid from the western Mediterranean, also present in the strip of wild nature directly adjacent to the Southern Cantabrian Mountains. Until about 10 years ago the genus Anacamptis counted only one member, namely the pyramidal orchid (Anacamptis pyramidalis). However, due to the strong rise of the genetic research the former orchid classifications have been shaken up quiet a bit. Many orchids which traditionally were counted to the genus Orchis were found to have much more in common with the Anacamptis pyramidalis than was ever suspected. The research of Richard Bateman and co-workers in 2003 led to a new classification based on phylogenetics and other aspects. As always in science not all researchers agreed with the changes, but today it seems to be the most widely accepted classification. However, because of this relatively recent change and some resistance against the new name , it is possible to find this orchid in the literature as the Orchis champagneuxii. The genus Anacamptis is divided into sections and the Anacamptis champagneuxii belongs to the section Moriones which also include the green winged orchid (Anacamptis morio) and the Anacamptis picta, which are all present in the Cantabrian Mountains.The species name champagneuxii is in honor of the French botanist Champagneux (1774-1845). 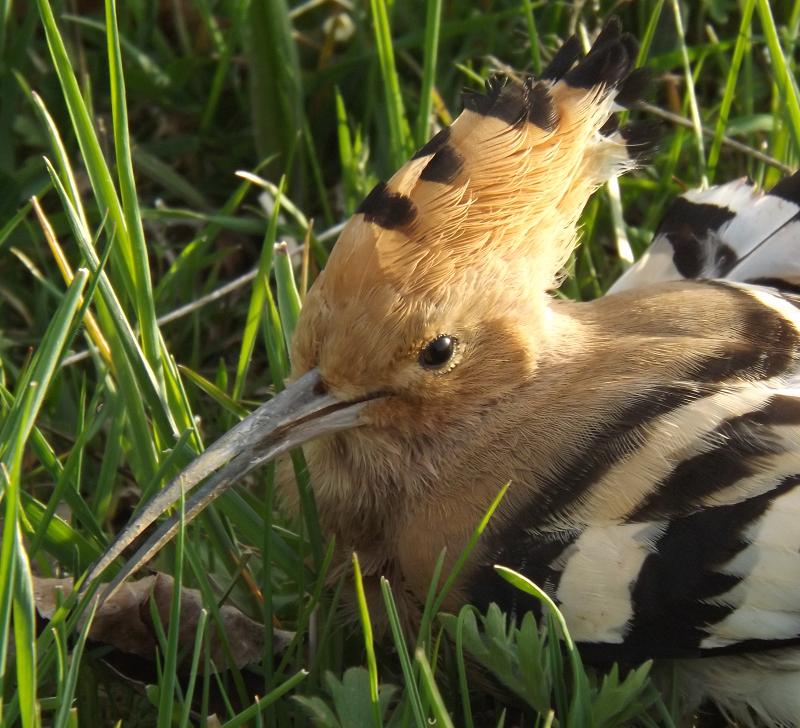 When trying to save a hoopoe seems more important than mushroom hunting.

Looking for some tasty St. George´s mushrooms (Calocybe gambosa or Tricholoma Georgii), a mushroom that is common in our region, we suddenly saw a black and white bird sitting in the grass. Maybe it was a magpie? No, it was a hoopoe. Without noticing we had approached the hoopoe up to at least 5 meters and it still hadn´t flown away, would it be dead? No, although the creature didn´t move a muscle, it still blinked occasionally with its eyes. This was an opportunity and quickly I walked back to the car to grab the camera. At a closer inspection its right wing showed to be in an unnatural position and when after a cautious approach the bird still didn´t get away, it was confirmed that there was something wrong with it. After picking it up very carefully we could see that the wing was damaged. What to do now? Luckily in our region we have a wildlife care-center where one of the attendants is a friend of ours. The mushrooms were immediately forgotten and we set off to the care-center which is situated in the middle of the woods. Once we got there it turned out that nobody was present, so we phoned our friend which wasn´t at home neither. Nevertheless he said we could leave the poor animal in the back of his land rover which was parked by his house. We installed the hoopoe as comfortable as possible and left it waiting for the attendant to come home. The next day we called him, but it turned out that despite the devoted care the animal had deceased.


Some Facts
As can be seen in the photos the hoopoe is a quiet exotic looking bird with black and white wings and tail and a pinkish-brown body. Another conspicuous characteristic is the pinkish crest, of which the upper part is also black and white. In the United Kingdom the hoopoe is a very rare bird, with only a very occasional breed. In spring some hoopoes may appear in the south of England when they are migrating. However, in Spain the hoopoe is rather a common bird which is resident in the south of the Iberian Peninsula. Also in our region it can be spotted frequently, although only as a summer guest (see map), especially in the more arid meseta that lies directly south of the Cantabrian Mountains. The hoopoe likes to stroll around in meadows and along paths, searching with its long beak to surprise various unlucky arthropods and sometimes lizards. Good places for spotting them are the forest edges of planted pine groves. These are planted on former agricultural lands and are therefore of a reduced size and surrounded by open fields, very much to the liking of the hoopoe. Moreover, the hoopoe is fond of the pine processionary caterpillar, a caterpillar which is quite harmful to the pines. This has caused the hoopoe to be commonly considered as a very welcome guest.

The limestone cliffs of the Asturian Coast (Spain). 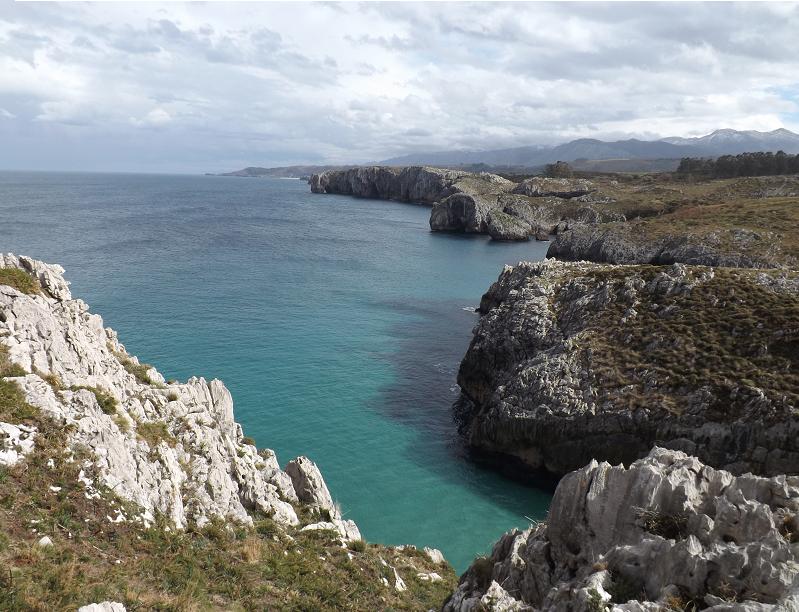 How the waves form the coast.


At some places the northern border of the Cantabrian Mountains almost reaches to the Bay of Biscay, from which it is only separated by a narrow coastal plain, and one of these places is the east of Spanish province of Asturias. Here the plain consists mainly of limestone, which is a rock with the property that it is slightly soluble in water. For this reason the eternal waves of the ocean have sculpted a very particular terrain with steep cliffs and numerous sea caves. Furthermore, the whole area experiences a slow geological uplift which has caused the rising of the former sea bottom above sea level, forming the actual coastal plain between the sea and the Cantabrian Mountains.  In other words, the current plain was formed by the wave action of the sea, which reached a few kilometers further inland to the foot of the mountains. After the coastal plain was elevated, caves have formed in many places. In some of these caves beautiful prehistoric rock paintings have been found, including those of the Cueva del Pindal (Colombres) and the caves of Tito Bustillo (Ribadesella).  Before showing the pictures of the coast  I will show a few "boring" maps which indicate the exact location of where we visited the coastal plain.

This location is part of the officially protected landscape of the eastern Asturian coast (Paisaje Protegido de la Costa Oriental Asturiana), which covers a total length along the coast of about 30 kilometers and a surface of nearly 67 square kilometer.

READ FURTHER AND ENJOY THE PHOTO´S.