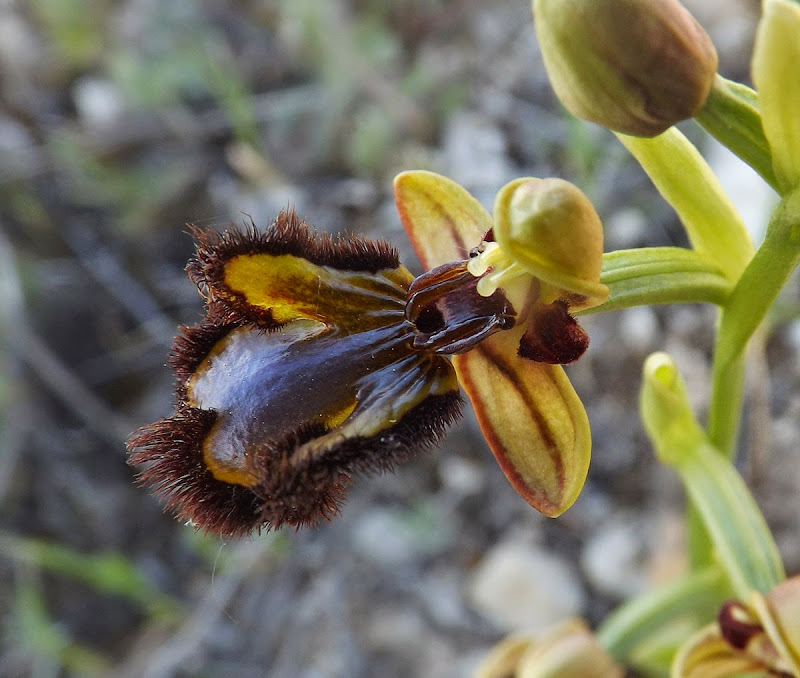 
Of the genus Neottia we have photographed two species: The Bird's-nest Orchid (Neottia nidus-avis) and the Common Twayblade (Neottia ovata). The first orchid is mainly found in beech forests, while the Common Twayblade is significantly less concerned about specific environments. The latter, which until recently was assigned to the genus Listera, is a good example of the many recent name changes.

From the inconspicuous genus Ladies Tresses (Spiranthes) both the Summer Ladies-tresses (S. aestivalis) and the Autumn Ladies-tresses (S. spiralis) are present. The first is quite rare in the Cantabrian Mountains, although the flowering period in August and the unnoticeable little flowers have undoubtedly led to an underestimation of the actual spread. At least, we have been able to find some 10 populations around my hometown. Actually applies To the Summer Laides-tresses we can actually apply the same story, although this orchid is more common in the eastern part of the Cordillera Cantabrica.

Of the genus Serapias we have located three species. The Tongue Orchid (S. lingua) is a fairly widespread orchid, while the Serapias cordigera mainly occurs in the lower and climatically milder parts of the Cordillera (Asturias and Cantabria). The Serapias parviflora is an extremely rare and also very inconspicuous orchid, which last year was discovered only a few miles from my hometown. The Long Lipped Serapias (S. vomeracea) has been found in 2006 in the most eastern part of the Cantabrian Mountains by the Dutchman Venhuis. This orchid is (still) not photographed.


Genetic research has led to a substantial increase in the genus Anacamptis, which has grown from one to five species. In our region very common Pyramidal Orchid (A. pyramidalis) is now no longer the only representative of this genus. The rather rare Anacamptis champagneuxii almost always occurs in company with the Anacamptis picta. Both species are sometimes considered to be subspecies of the Green-winged Orchid (A. morio).

Also the genus Ophrys counts a large number of members and well as many as 11 species; although the difference between species and sub-species is not always clear. The species which are generally recognized and which are clearly distinguishable in the field we name first: The Bee Orchid (O. apifera) which is not very common and usually occurs in small numbers at a time; the Fly Orchis (O. insectifera), quite rare and not a lover of drought; The very rare Yellow Bee-orchid (O. lutea), but of which we managed to find more than a dozen populations (although also this orchid is supposed not to occur in the whole province!)


The Woodcock Bee.orchid (O. scolopax) which is clearly identifiable by the protruding appendage of the lip. Of the in the Cantabrian Mountains extremely rare Mirror Bee-orchid (O. speculum) we have found one specimen in the province of León, which is the most western occurrence of this species in Spain. The Sawfly Orchid (O. tenthredenifera) is especially very numerous in our region. The SomberBee-orchid (O. fusca) is found both along the northern edge and along the southern edge of the Cantabrian Mountains, while Ophrys bilunata and Ophrys dyris (both also viewed as subspecies of O. fusca) only are observed along the southern edge. Of the Sphegodes Group the following species have been photographed: the Early Spider-orchid (O. sphegodes), Ophrys castellano, Ophrys incubacea and Ophrys araneola. Again, there is no common agreement about the different species and / or subspecies.
Posted by Marius van Heiningen at 7:48 PM