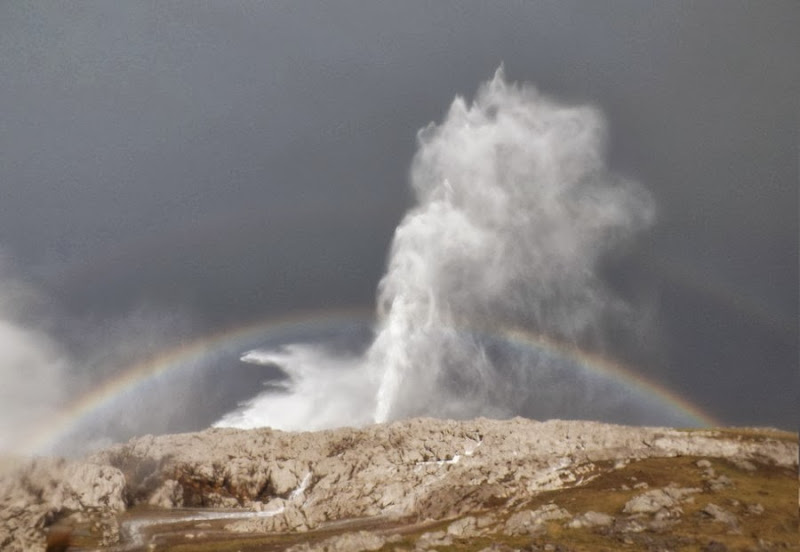 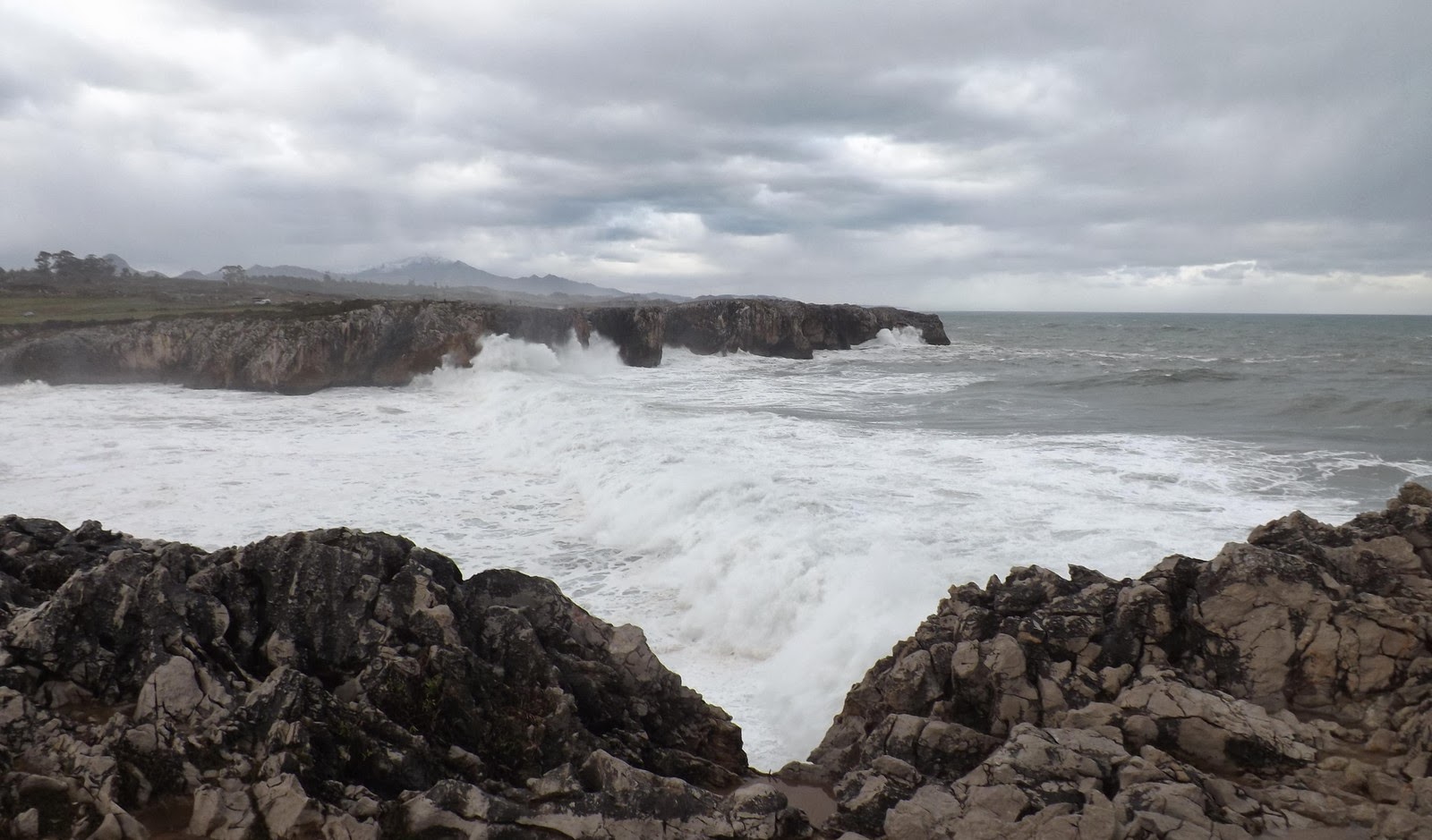 Waves entering the bay of Llames, the cliffs are here about 25 meter high and the waves around 7 meters.

Just to the right of the bufón there stands a person, compare the size!

Several bufones simultaneously in action. It was a Tuesday and this was also the first wave front to arrive at the Asturian coast, that´s the reason why there are so few people. But when after an intense weather-campaign of the local news the second wave front arrived at Saturday, it looked like a fairground (will be covered in the next post). 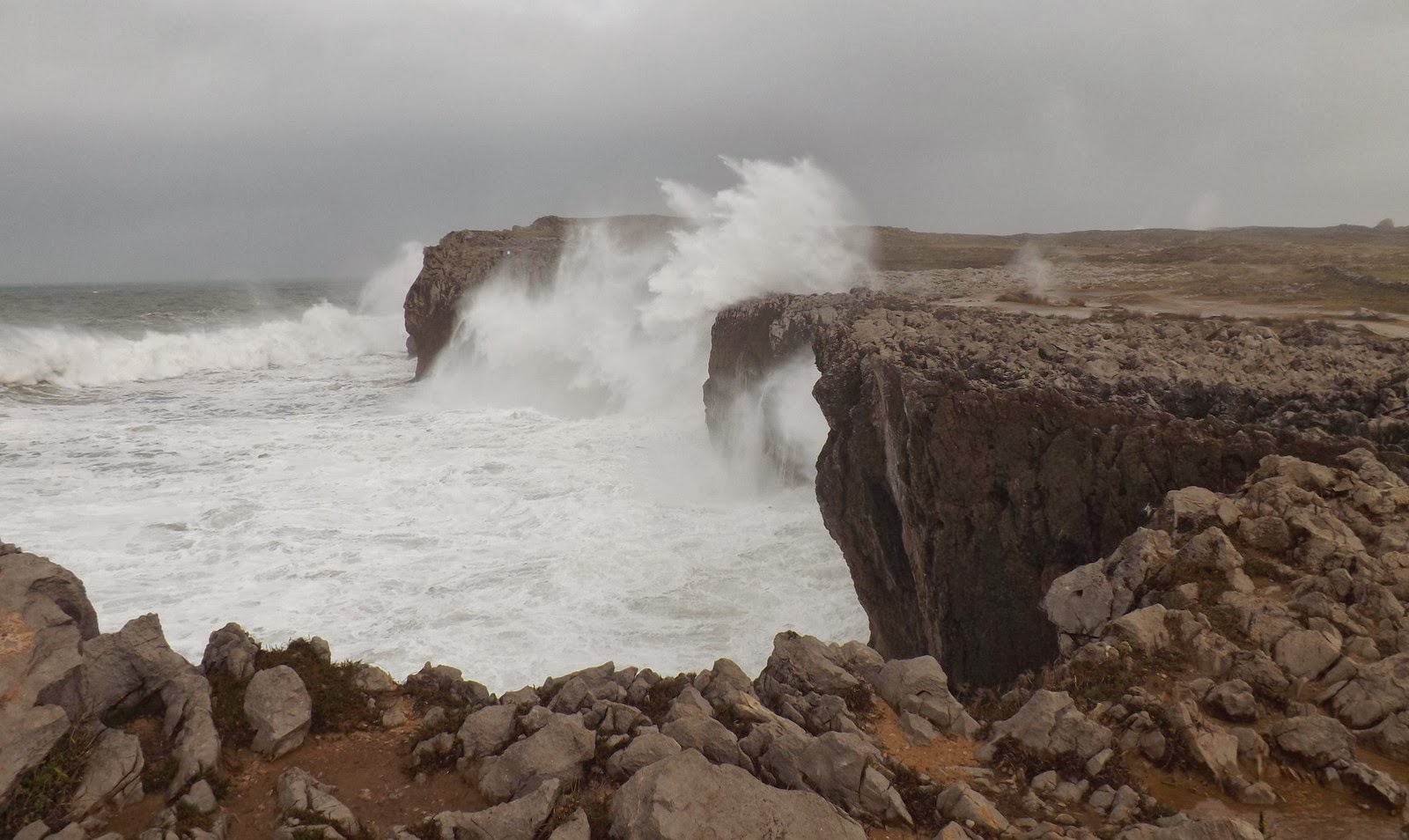 On this side of the bay the cliffs are about 30 or 40 meter high, but it is still very unwise to stand close to the edge. 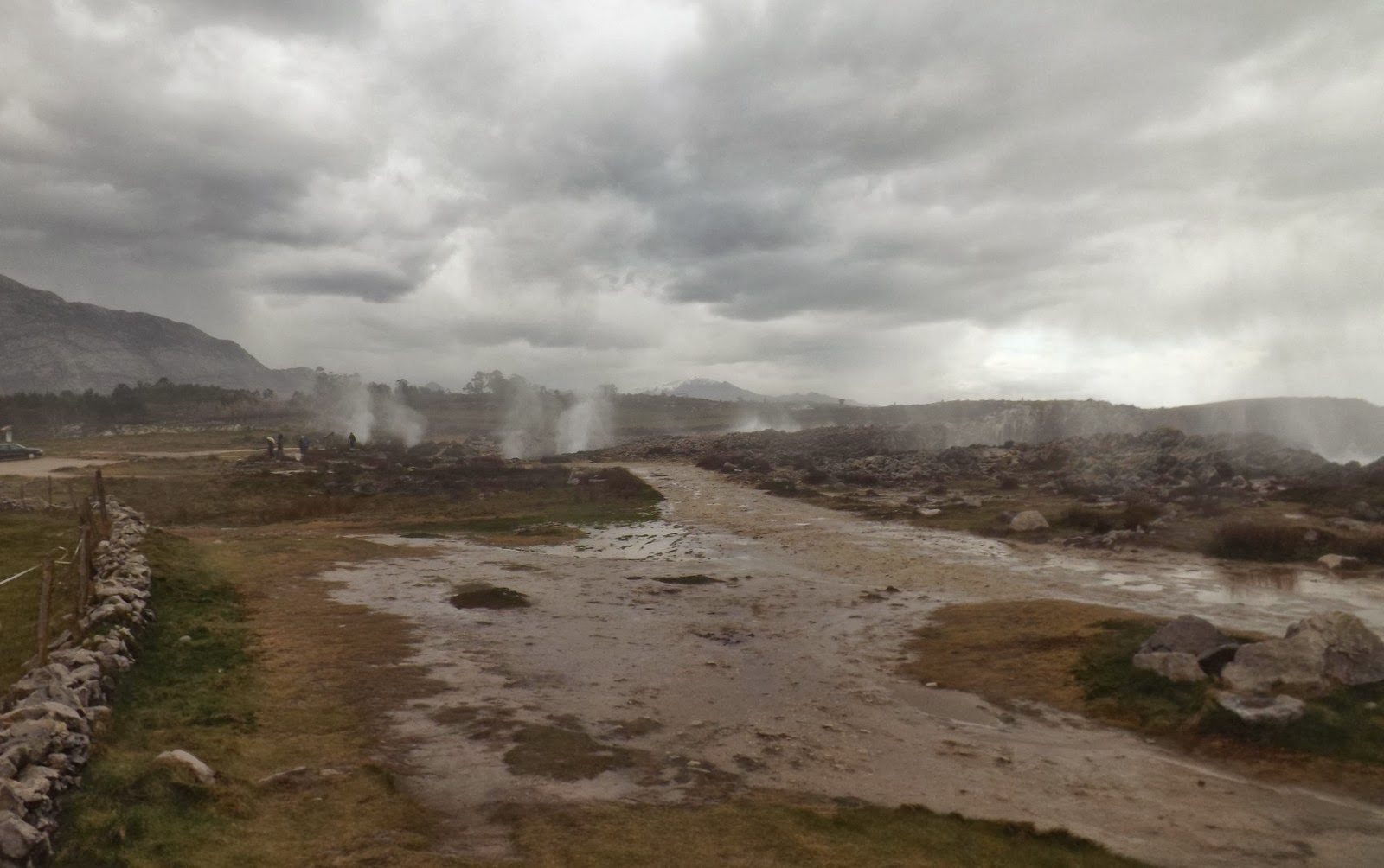 At the background there are several bufones in action. The wind and the spray are coming this way forming a considerable flow of water. 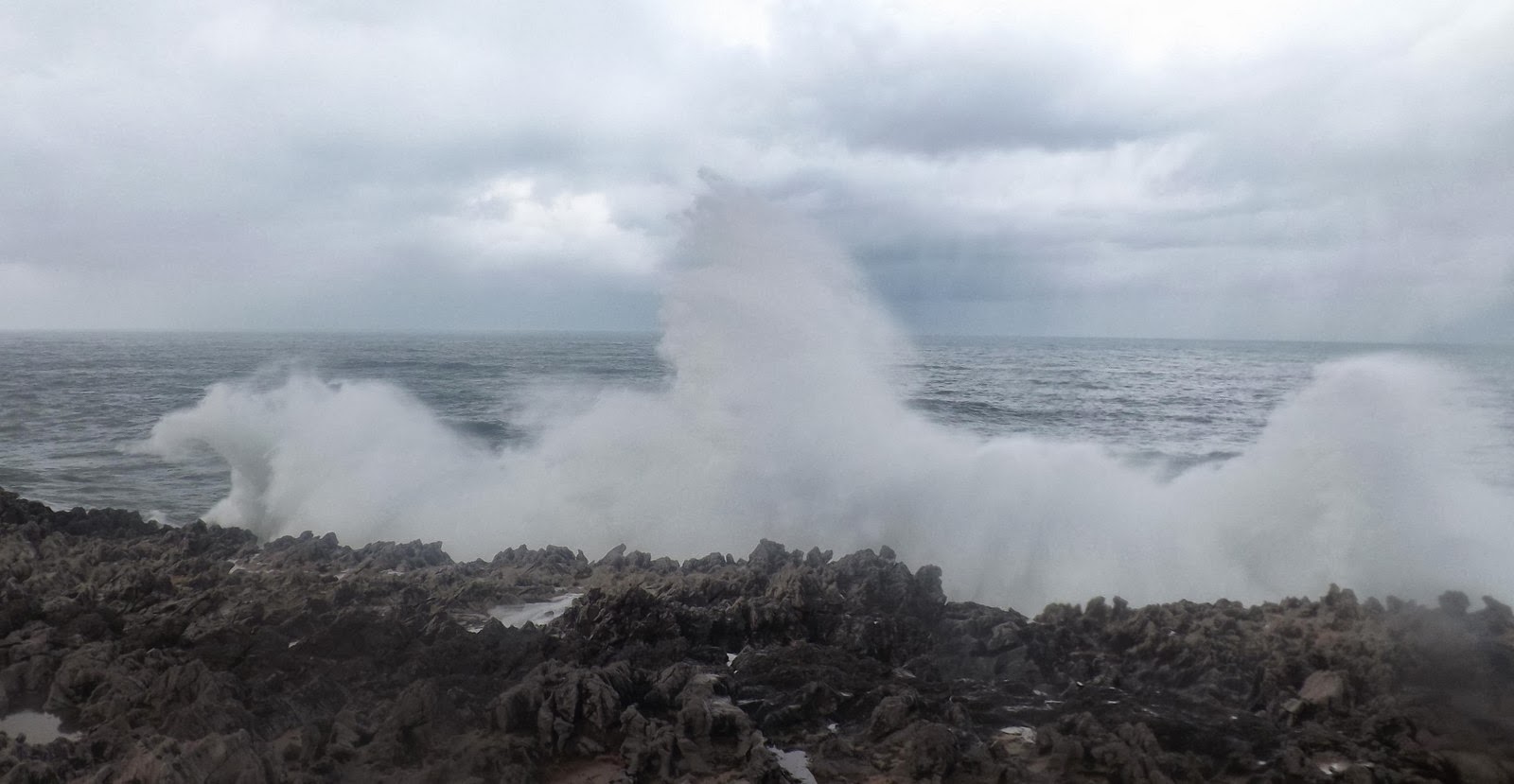 We´ve changed of place, we are now at the 25-meter high cliffs of Cuevas del Mar, but still we had to keep a safe distance to the edge. It is very dangerous to go where the rocks are wet and barren. For a slight and careful approach to the edge it is highly recommended to take your time observing the waves, because every now and then there comes a very big one! 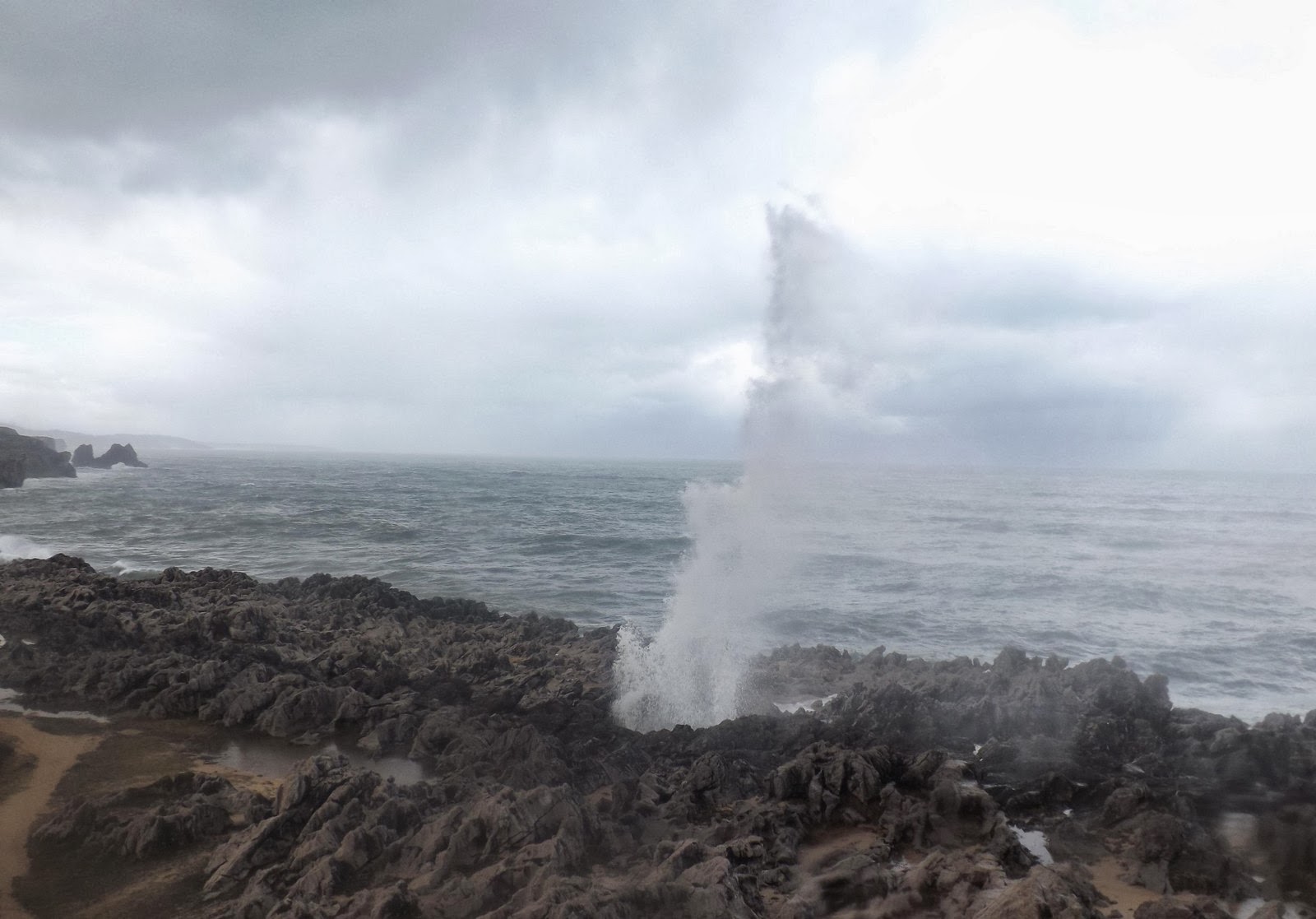 The bufón of Cuevas del Mar. 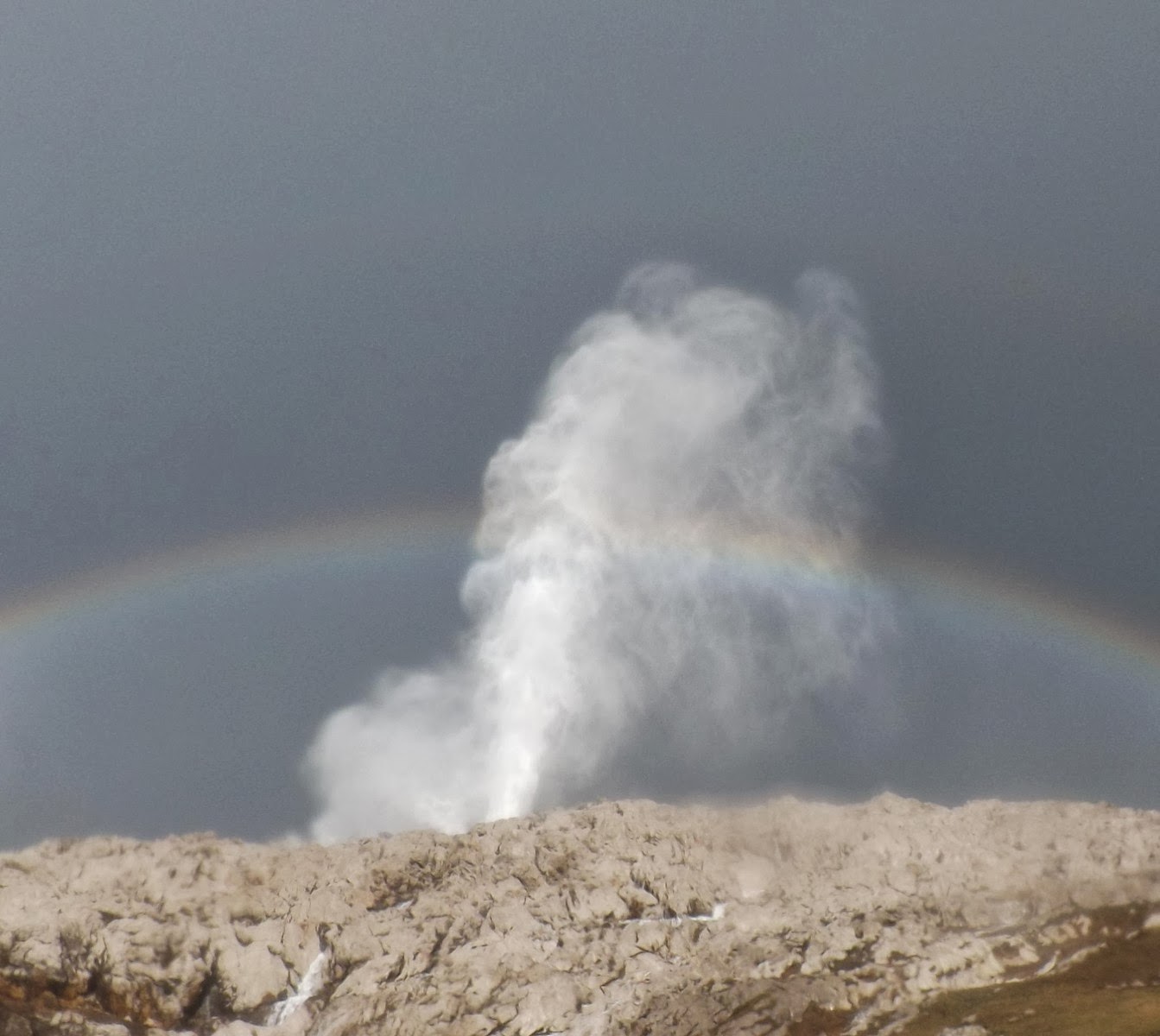 The next stop was by the Bufón of Santiuste, one of the highest bufones of the entire coast. Just at that moment the sun shone through the clouds which caused this nice rainbow​​. At the foreground the water is flowing back to the sea. 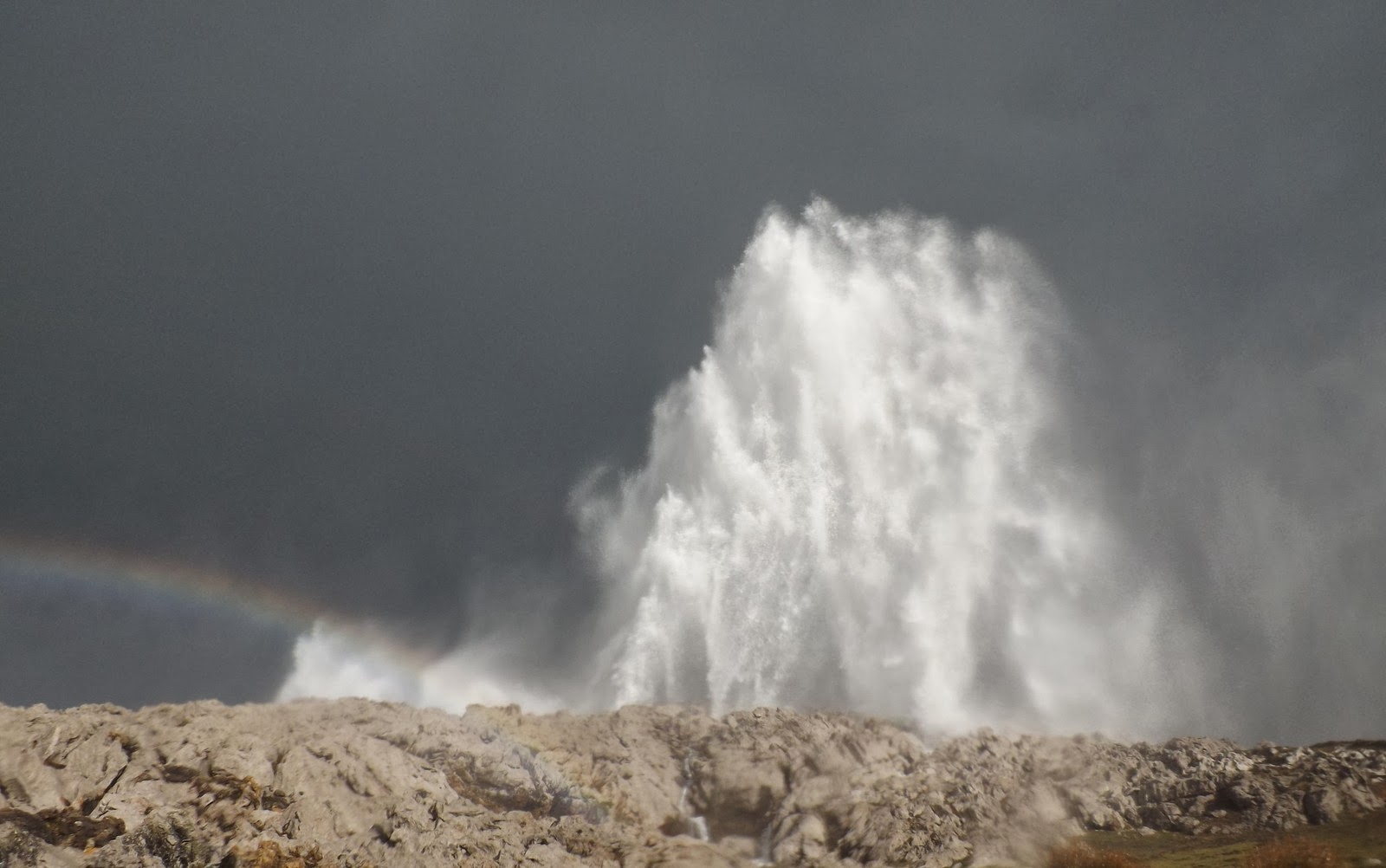 The Bufón not only expels spray but also vast amounts of "solid" water. This bufones are quiet dangerous too, not so very long ago an imprudent person was suddenly seized and hurled into the air for dozens of meters, with a fatal outcome. 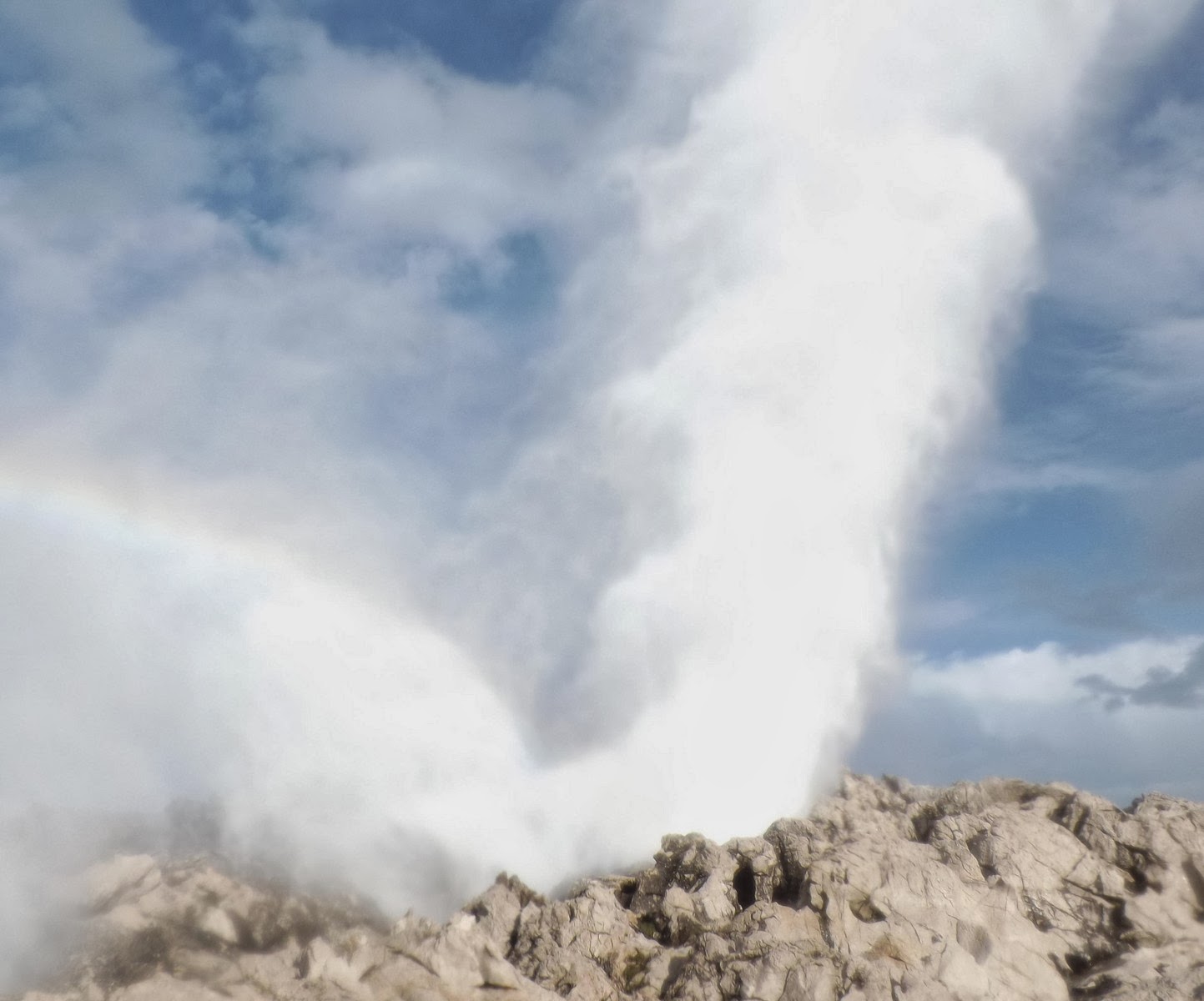 But given the strength and the bellowing with which the bufón blows out the water, it is almost unbelievable that someone dares to come so close. 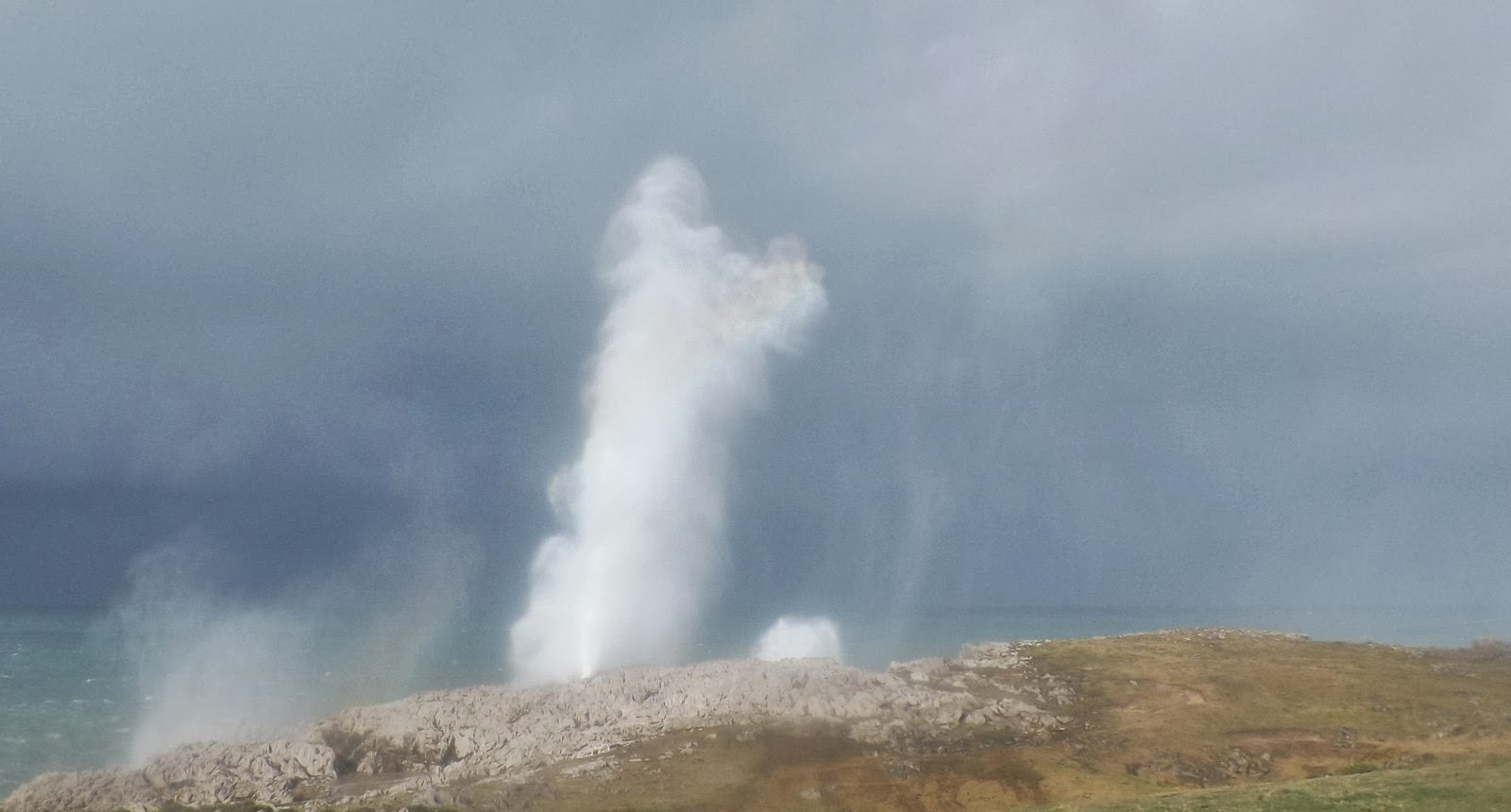 For me it was impossible to leave without looking back. This particular bufón can reach a height of more than 50 meters. 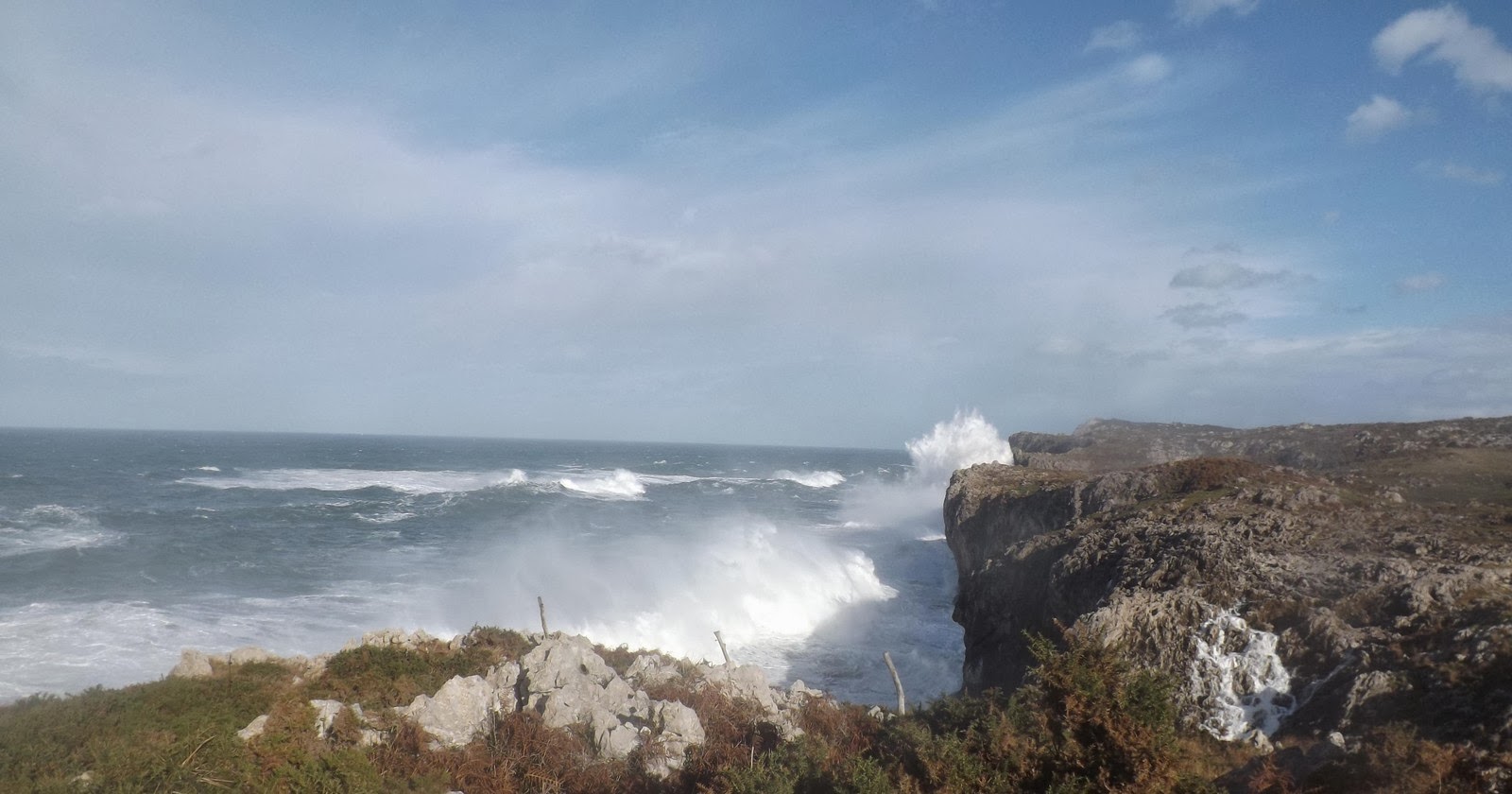 The bufones and the coast of Arenillas, proclaimed a Natural Monument some years ago, were our next destination. 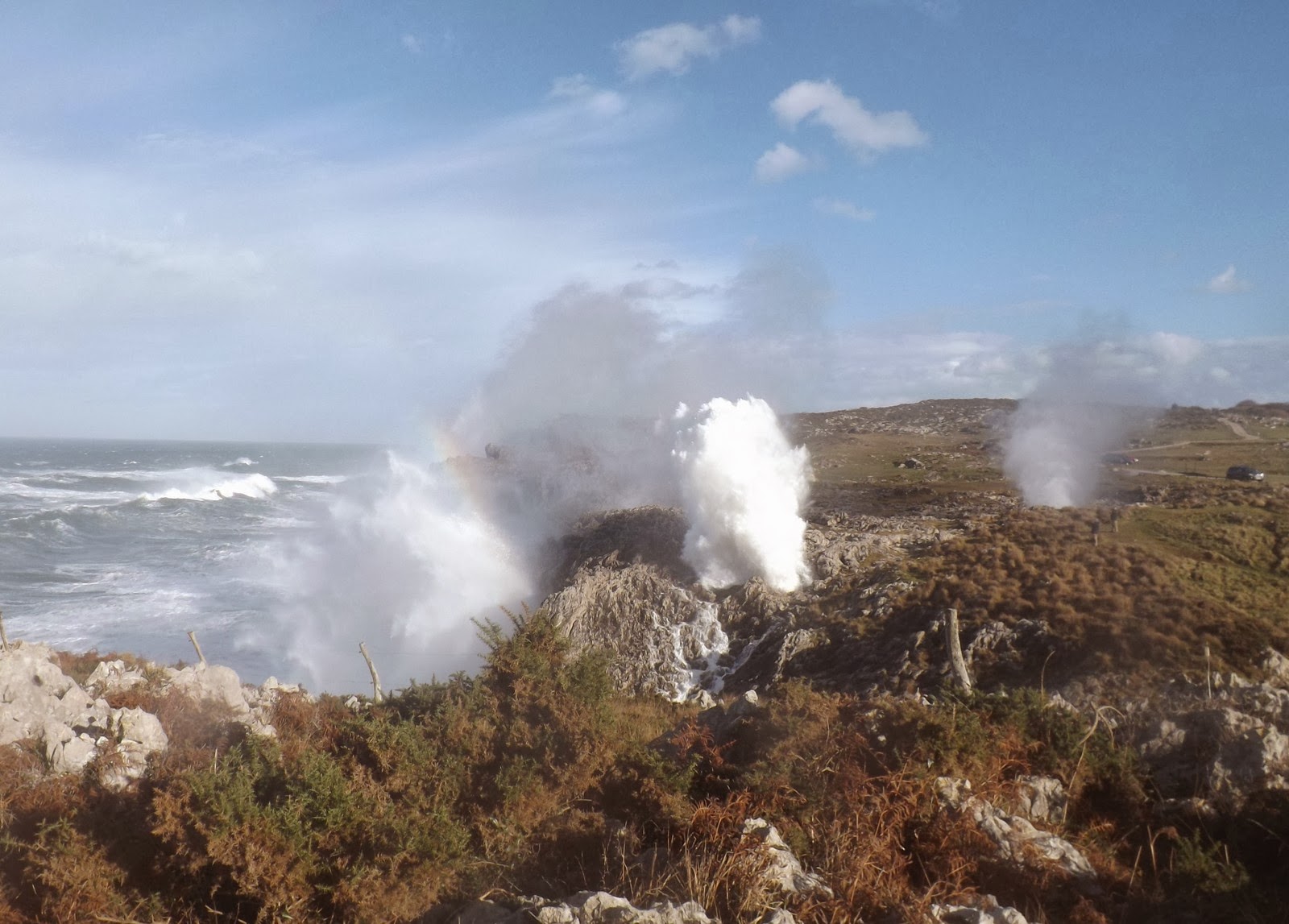 The bufones of Arenillas are smaller but very active, they are also working with a relative small swell. 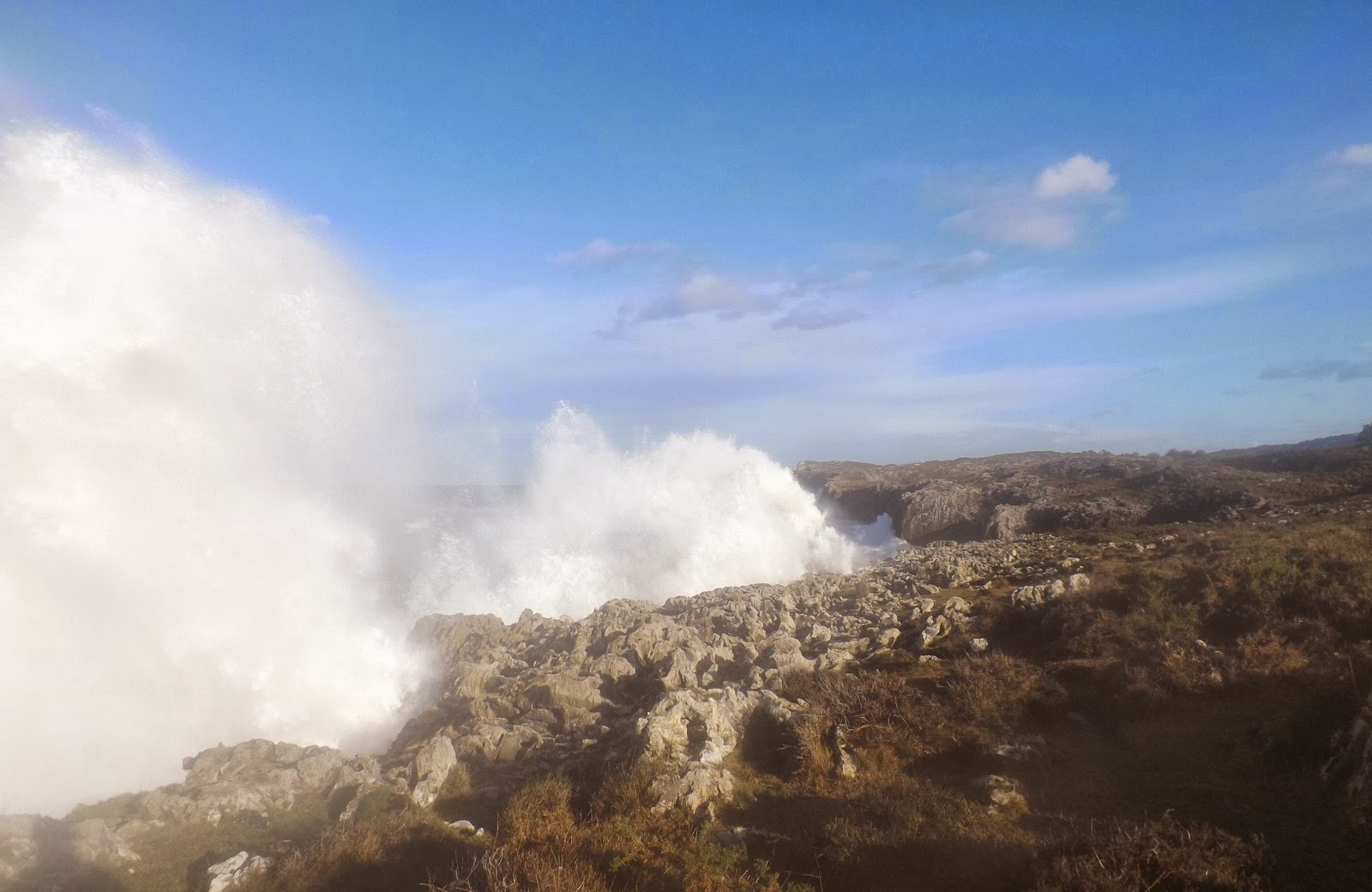 ......a big wave which splashes well over the edge of the cliff.