A family of Egyptian vultures. 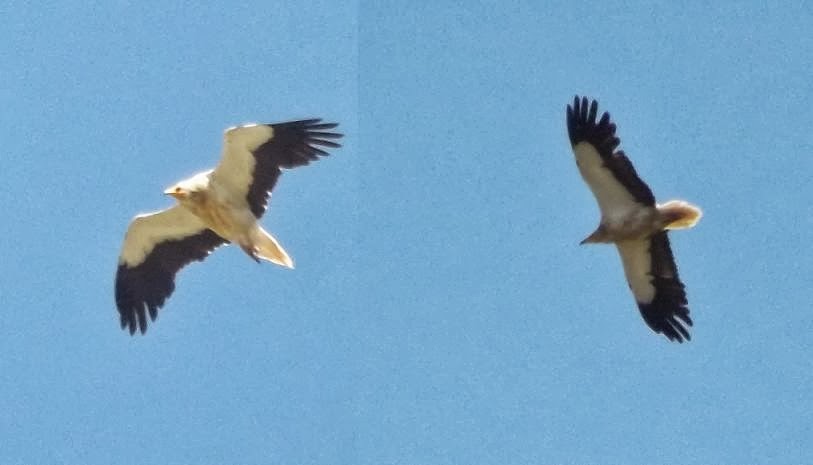 One day in august last year I decided to observe a family of Egyptian vultures, which had their nest situated in one of the fissures of a great limestone cliff, just about a kilometre away from my village. I climbed a parallel limestone ridge to reach a height slightly above the rock shelters on the opposite side of the valley, where I settled comfortably with binoculars and camera ready. For some exciting three hours I kept observing the flights of a pair of Egyptian vultures with their only young and occasionally some griffon vultures. I tried to shoot some photos, but my semi-reflex camera is better in shooting short distances macro-photos than long distance photos of relatively small objects.

On internet there is already a lot of general information available about the Egyptian vulture, so in this post it won´t be repeated, but instead I like to emphasize on the geographic distribution. A search on bird-websites leads to variable data about the number of adult individuals in Europe and Spain, but all reach the same conclusion of an important generalized decline. In the 2008 SEO/birdlife censoring for Spain the results gives 1452 certain pairs and 104 possible pairs, while the whole EU population is estimated at between 1700 and 1800 pairs (Environmental website of the European Commission). So it doesn´t seem unreasonable to consider Spain as the European stronghold of the Egyptian vulture (see map 1).  In recent years the Iberian population has declined more than 25%, mainly because of poisoning caused by the consumption of illegal baits used for predator control. Also the loss of food supplies caused by the sealing of municipal waste dumps, a great decline of the Spanish rabbit population and the current controlling of the disposal of animal carcasses (2002 regulations, trying to avoid the bovine spongiform encephalopathy  (BSE) or better known as mad cow disease). Other important causes are electrocution when colliding with power lines, lead poisoning (from gunshots), collisions with wind turbines, disturbance and habitat loss. Decline in Africa, the Egyptian vulture is a migratory bird, is likely to be caused by loss of food availability (extinction of the African wildlife) and of direct hunting in some places. Therefore the Neophron percnopterus has become in the unfortunate situation of being considered an endangered (EN)-species, which means that there is a high risk of extinction in the wild.

The distribution map of the Virtual Atlas of the “Avifauna Terrestre de España” (Terrestrial Bird-fauna of Spain, map 2) gives a high concentration of pairs in the central and eastern Cantabrian Mountains, together with a general high concentration for the inland of north-east Spain. A 50x50 km frequency grid gives information about the percentage of 10x10 km grids occupied with the species concerned. For instance, when a 50x50 km grid has a frequency value of 60-80%, it means that between 30 and 40 grids of 10x10 km have at least one pairs of Egyptian vultures. From the six 50x50 km grids which together cover the Cantabrian Mountains, the grids number 6 (88%), 4 (80%) and 3 (72%) are placed second, third and fifth in the national rank of grids with the highest frequency (map 2), which highlights the Cantabrian Mountains as an excellent place to spot these beautiful birds. 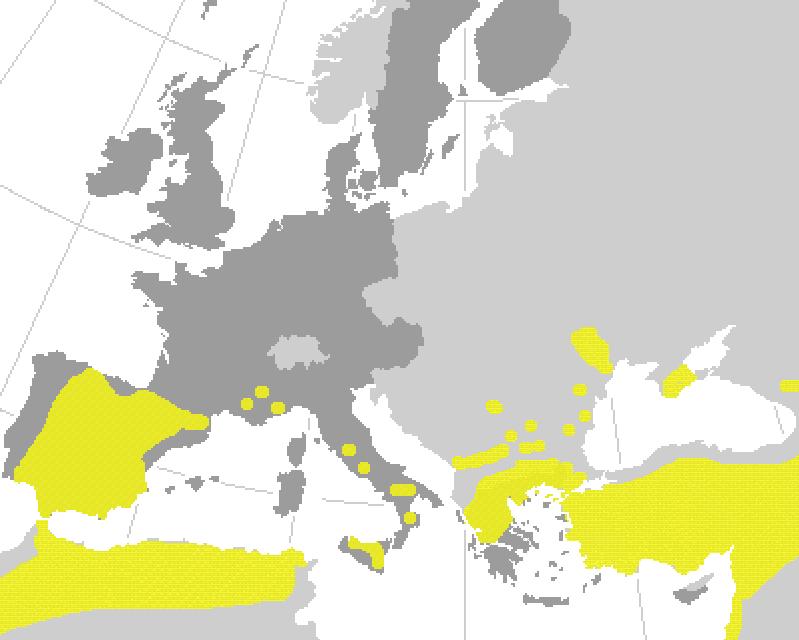 Map 1. This map is taken from the Environmental website of the European Commission. 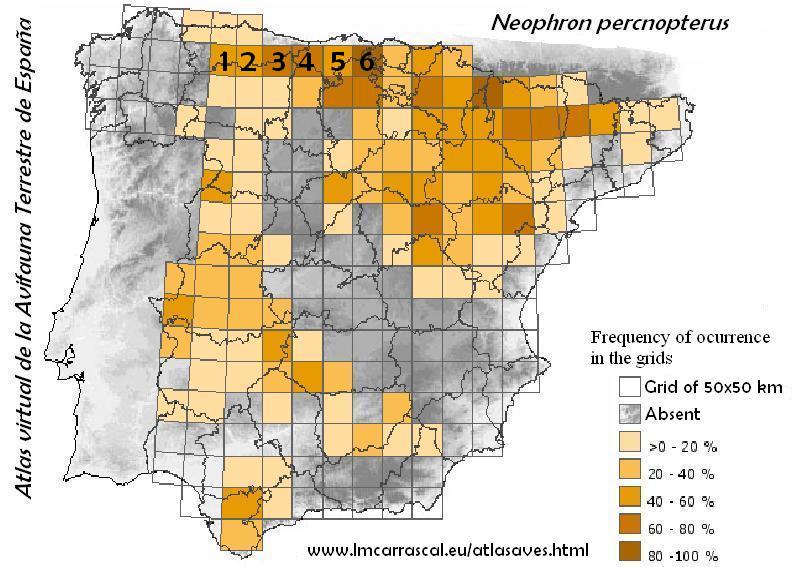 Map 2. This map is a very slight adaptation of the Neophron percnopterus distribution map of the Virtual Atlas of the “Avifauna Terrestre de España” (Terrestrial Bird-fauna of Spain). The grids 1 to 6 indicate the Cantabrian Mountains, with a very high concentration; the grids 6, 4 and 3 placing second, third and fifth of a total of 223 grids. 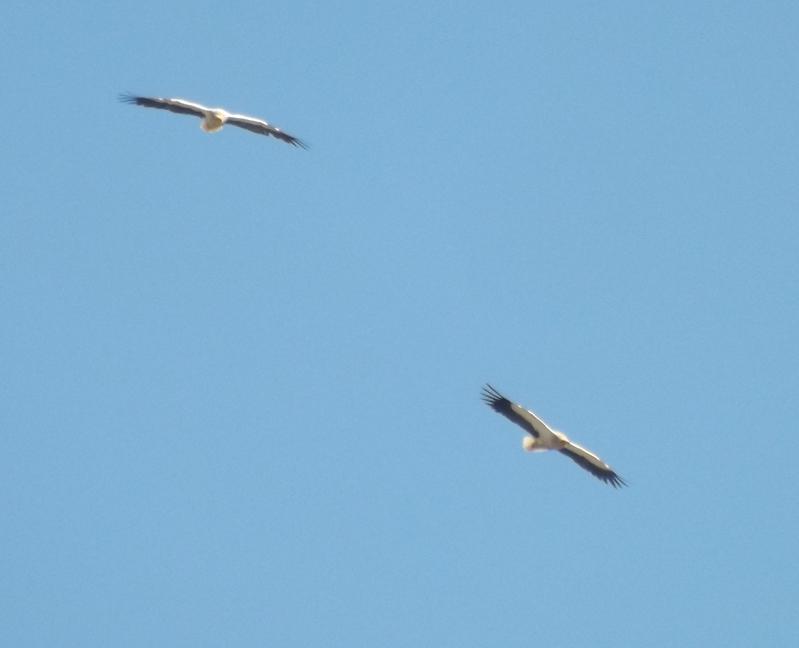 Photo 2. The pair flying together. 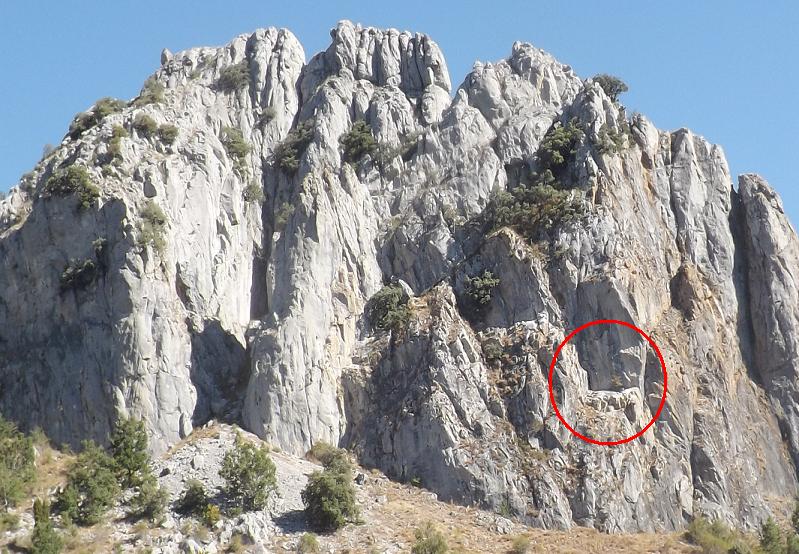 Photo 3 shows the cliff where they nested. At first I could see the fledged young flying around but soon it landed on a rock shelter, which is indicated in the photo with a red circle. 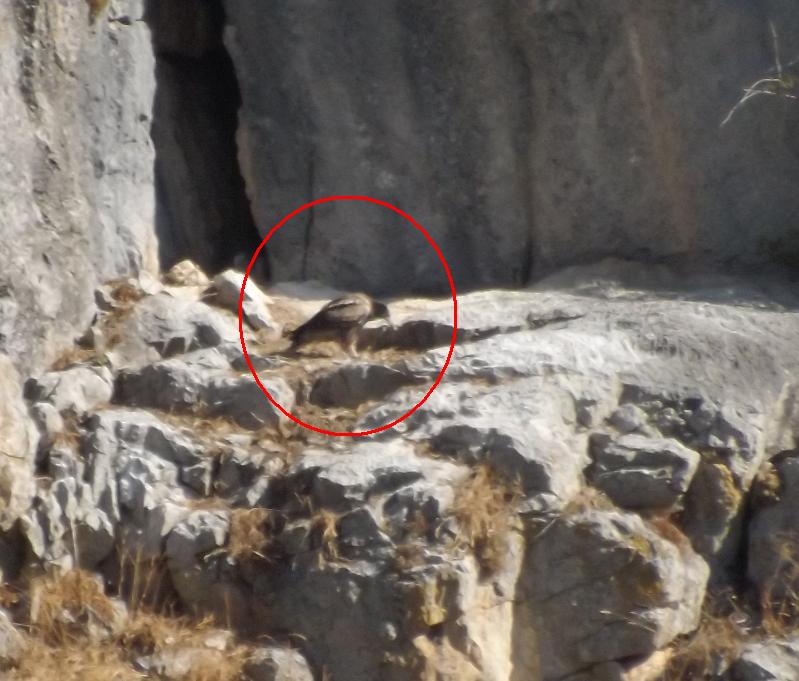 Photo 4 shows the rock shelter indicated in photo 3. The young birds are much darker than their parents. 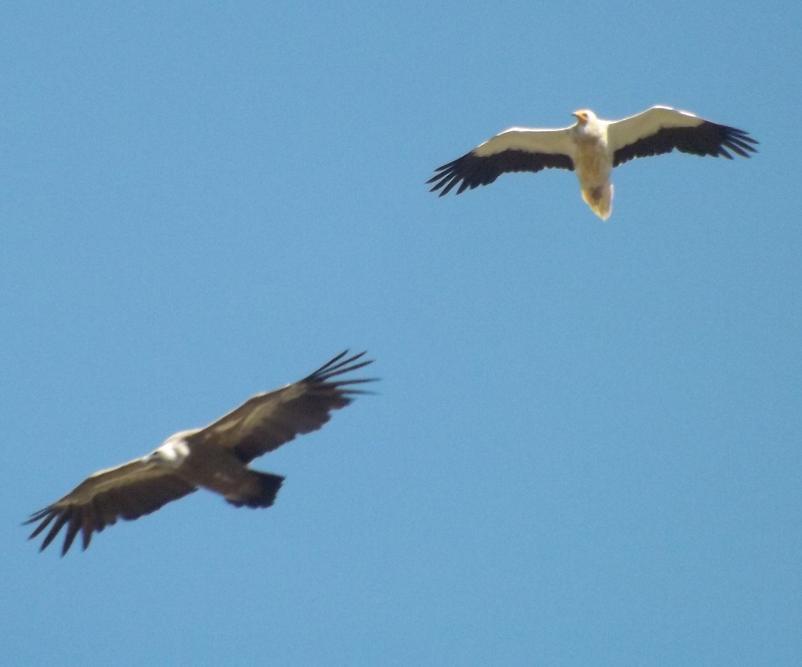 Photo 5. Every now and then there also crossed some Griffon vultures. A curious fact is that the Egyptian vultures would "accompany" their bigger cousins untill they were at some distance of the cliff. Maybe they were protecting the young? Very clear is the wedge shaped tail of the Neophron (apart from other characteristics).