Structure of an orchid flower

The structure of an orchid flower

I decided to write this post because I personally had some difficulty in finding clear pictures which explain the basal anatomy of an orchid flower. It seems that in every picture some basic parts were missing. In this entry I first give a brief summary of the basic parts of a common flower (stamen, carpel, sepals and petals), to continue with the basic parts of an orchid flower and followed by a more detailed description of the gynostemium (column). The structure of the labellum (lip) will be treated in another post because of its great complexity and diversity and its importance for indentifying the exact genera or species.

A typical flower has stamens, carpel(s), a whorl of sepals (calyx) and a whorl of petals (corolla).
A stamen is the pollen-producing male organ of the flower and normally consists of a threadlike filament with an anther on top. It is the anther which produces the pollen. All the stamens together are collectively called the androecium (man´s house).
A carpel is the seed-producing female organ of the flower and normally consists of an ovary, style and stigma. The ovary is the basal part of the carpel where one or more ovules are formed.  The style is a stalk through which the pollen reach the ovules in the ovary. The stigma is usually on top of the style and is often sticky to capture the pollen.
In many plants the carpels are fused into one or several carpel-like structures. All the carpels together (fused or unfused) are called the gynoecium (woman´s house). In almost all flowers the gynoecium is located in the centre, surrounded by the androecium. Both are surrounded by the perianth.
The perianth is the outer part of the flower consisting of the calyx (the sepals) and the corolla (the petals).  When the sepals and the petals are very similar they are called tepals. 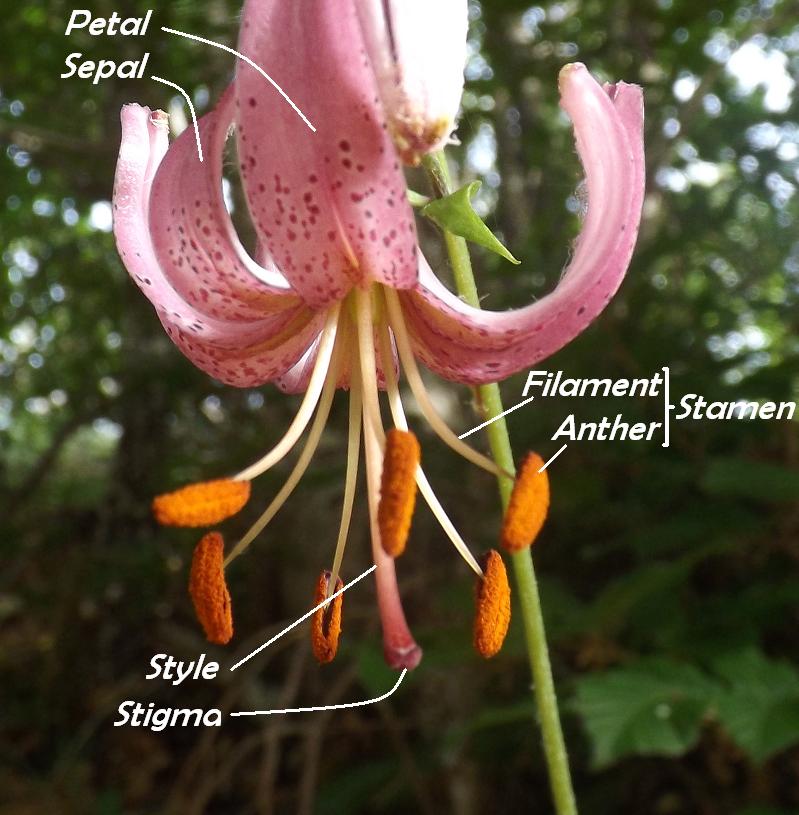 Photo 1 shows a flower of the Turk´s cap lily (Lilium martagon) with a 6 of stamens surrounding a single style with stigma. The flower has 3 petals and 3 sepals which look very much alike (tepals). 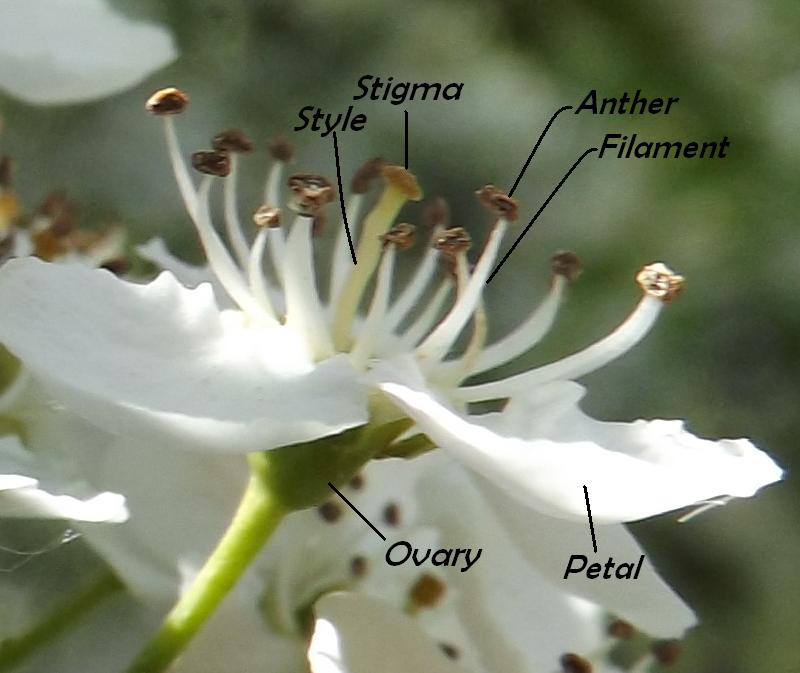 Photo 2. Side view of a Crataegus monogyna flower showing how the stamens (androecium) surround the single style and stigma (hence the name C. monogyna). In this photo the ovary is clearly visible.


Global structure of an orchid flower.


For visualization of the description see figure 1.


Orchid flowers are specialized and highly modified form the typical monocotyledon flower (one of two major groups of flowering plants, which sepals and petals are in threes and with parallel major leaf veins, besides other characteristics). The calyx (outermost whorl of sepals) and the corolla (whorl of petals) are situated on top (apex) of the ovary. The calyx consists of 3 sepals which resemble the colored petals of other flowers, and are usually bigger and more colourful than the lateral petals of the orchid (see figure 1). The dorsal or median sepal is slightly different from the lateral sepals. The corolla consists of 2 lateral petals and a very modified third petal called the lip or labellum, which is located at the bottom of the flower. It is not unusual for the lateral petals to look like the sepals, although smaller in size, but the labellum stands out for his large size and irregular form. The labellum is a complicated structure which may have a spur, with or without nectar, more or less callosities and sometimes an appendix (genera Ophrys). The labellum will be treated more specifically.


In the centre of the flower we can find the greatest modifications of the normal monocotyledon pattern; the fusion of the male and female organ into a single structure called the gynostemium or column. This structure will also be treated specifically.
The bract is a modified leave associated with a flower or an inflorescence stem and may be bigger, smaller, or of a different colour or shape. 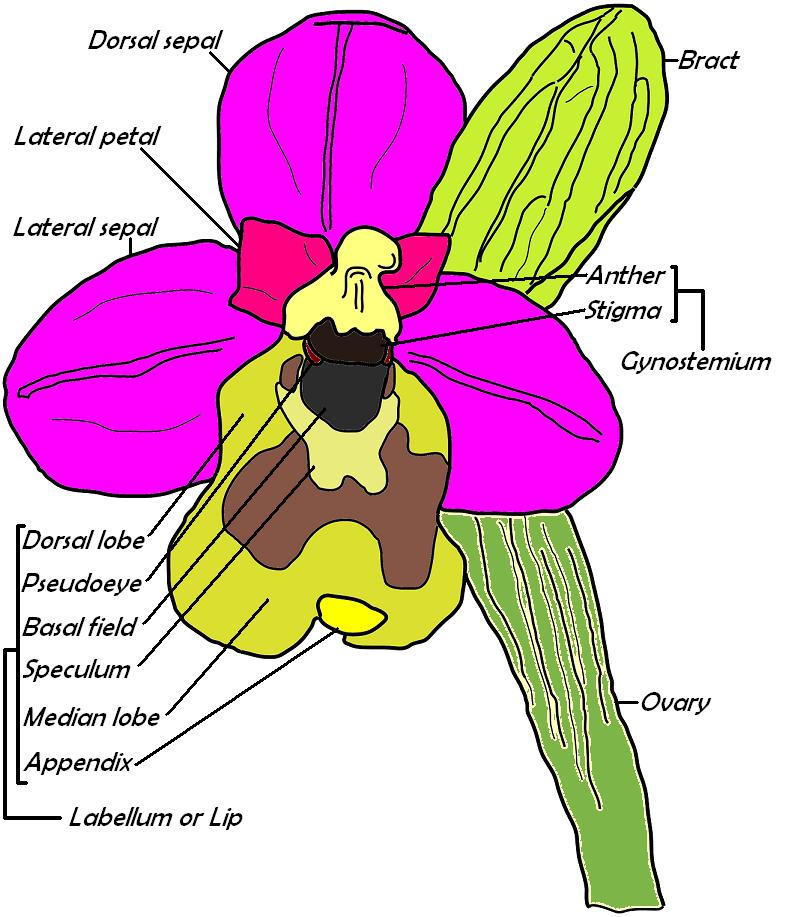 Figure 1 shows a picture of an Ophrys tenthredenifera, indicating the major parts of an orchid flower.

Orchids don´t have stamens and styles like most ordinary flowers. Instead the stamens have fused together to form one fertile stamen, which on his turn is adnate (union of dissimilar parts) to the style to form the gynostemium or column.
For most definitions the gynostemium and column are synonyms, although not everyone agrees. Most consensus seems to be in a gynostemium containing the fused stamens, style and stigma, which means the united sexual organs (androecium and gynoecium) without the ovary (Rudall P.J. and Bateman R.M., 2002).
Therefore the gynostemium is located on top of the ovary and in the centre of the flower. The anther forms the upper part of the column, while the style and the stigma form the lower part.
Upper part of the column:
In the front side of the anther there are two pollinia; each pollinium consists of a mass of pollen situated on top of a filament called the claudicle which in his lower part is attached to a sticky disc called the viscidium. The pollinia are sheltered in the anther cap (when the pollinea are gone, the “molds” are clearly visible), with the viscidium attached to the rostellum.
Lower part of the column:
The rostellum is a slender extension of the gynoecium and may play several roles in the complex pollination mechanism. First it keeps the viscidium sticky (for instance the rostellum cups of Orchis mascula), second it may prevent the flower form self-fertilization, third it may project the pollinia to the body of the pollinator and fourth it is possible that it collects pollen from the pollinator.
The stigma is a sticky surface situated in a shallow depression, at the bottom of the gynostemium, just above the labellum. The pollen which are attached to the stigma by the pollinator (or by self-pollination) start to germinate quickly, finally leading to seed-formation in the ovary. The receptivity of some orchids is quite long (15 days on average in Platanthera chlorantha, Stpiczynska, 2002), what seems to be an adaptation to low-level pollinator activity. 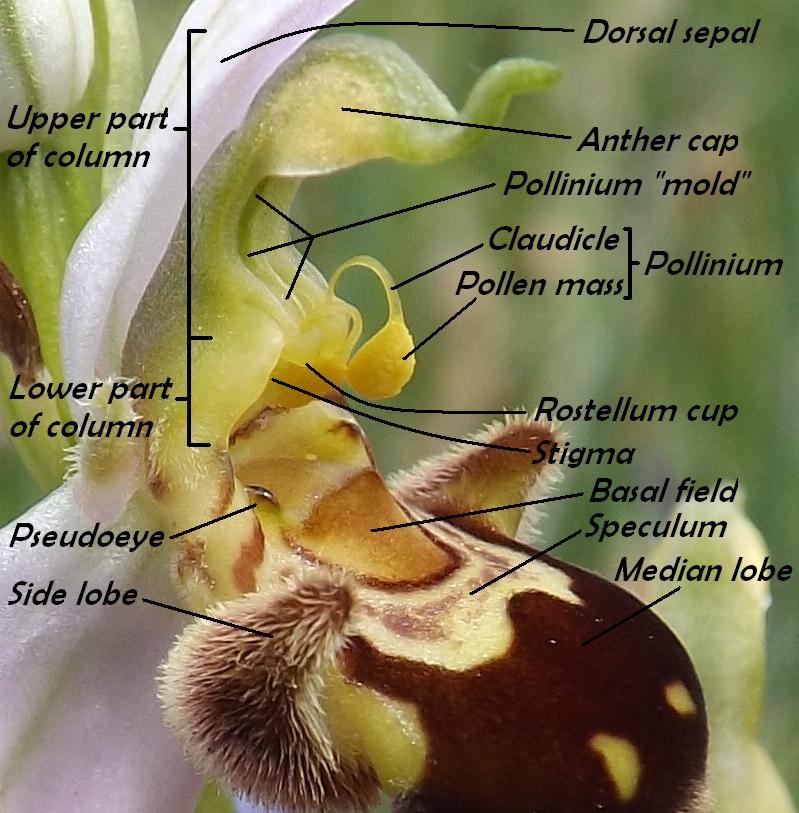 Photo 3. Side view of the column of Ophrys apifera.The curiosity of this photo is that the pollinia are in position of auto-pollination (self-fertilization) and are bending over to make contact with the stigma, which is located in the hollow under the upper part of the column. Good visible is the mold where the claudicle was kept secure. The anther cap has the form of a bird. Of the three parts of the pollinium (viscidium, claudicle and pollen mass) only the viscidium is invisible because it is located inside the rostellum cup. The pseudoeyes, basal field, speculum, side lobes and median lobe are all part of the labellum. 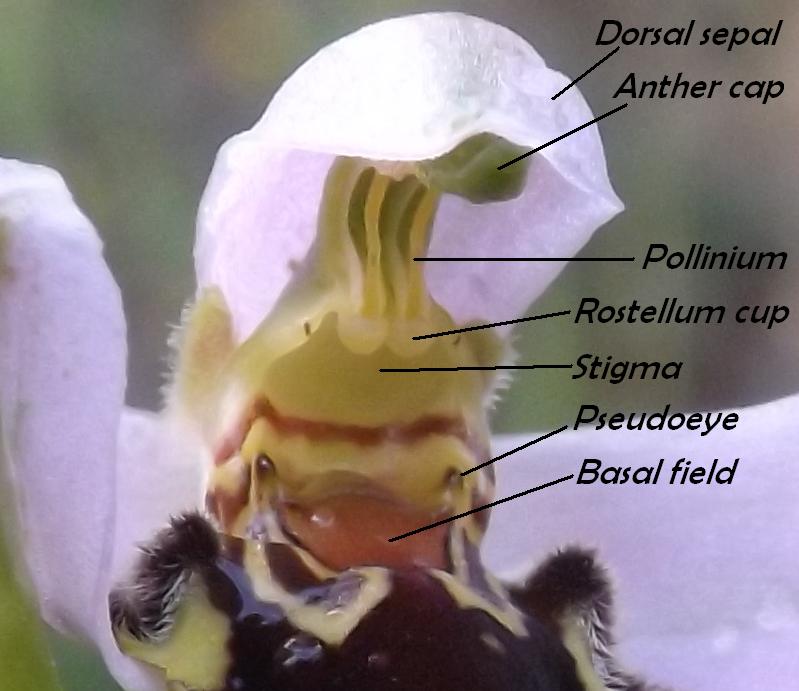 Photo 4. Front view of the column of Ophrys apifera.This photo shows a good frontal view of the stigmatic cavity and the rostellum cups. It also shows that the pollinia have started the process of self-pollination, because the caudicles are already loose from the “molds”. The anther cap is partly covered by the dorsal sepal.